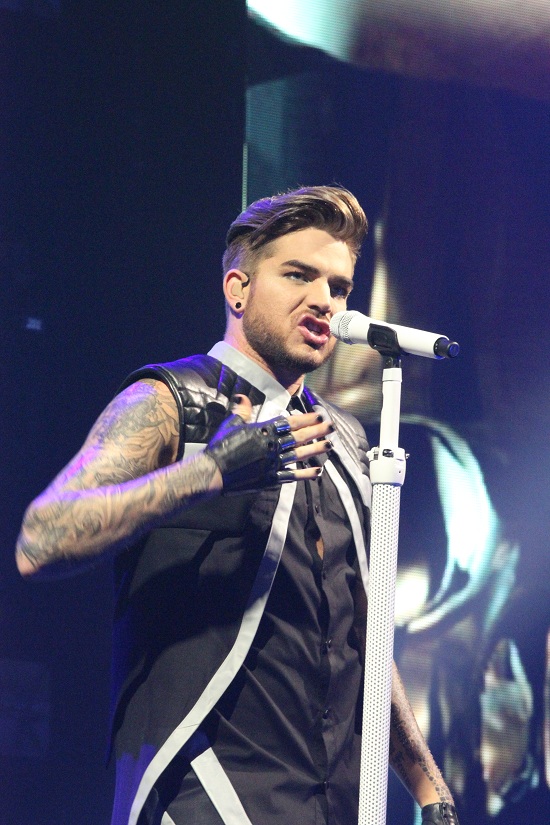 For those of you who are not so familiar with Adam Lambert – he’s a chart topping, multi award winning, multi platinum selling, singer, songwriter and one hell of a performer! All that after finishing as runner up in the 2009 series of American Idol!

When I heard he was back in Oz for The Original High tour, and playing Palais Theatre, I just knew it was going to feel like a private party!

Running almost on schedule due to the mammoth task of cramming everyone into the sold out venue, queues were still forming down the street with only 5 minutes to go til stage time! A warm buzz filled the humid hall as thousands of “Glamberts” excitedly awaited their favourite of all the Idols

Eventually the stage lights up as his band appears, and a silhouette of Adam appears as graphics on the backing screen, just a short teaser before the man himself bounces larger than life onto a podium to a loud cheer from his audience. Dressed in a futuristic style, cape like sleeveless jacket and knee high, white Doc Martens, he almost looks like a super hero.

He opens with Evil In The Night from the tour’s namesake album The Original High album and follows up with For Your Entertainment from 2009, just to remind us of where he began. Then without hesitation, he launches straight back into the new stuff with Ghost Town.

After an extremely energetic start to the night, a slightly more laid back sound with Rumours, which was originally recorded with female vocalist Tove Lo. Mid song, what sounded like a gunshot fired, a blown amp perhaps? This happened another 3 times throughout the night, but we didn’t lose sound and Adam wasn’t phased at all and continued on like nothing happened!

Accompanied by a male and female backing vocals/dancers, the three of them bounced off one another radiating a fiery energy.

Adam has created a pretty unique sound with this album; I can clearly hear influences of dance, house and also a bit of funk. As he begins Runaway, his female vocalist/dancer takes to the centre platform and performs some suggestive pole dancer moves and super high kicks, while black and white scenes of a strip club played out behind her.

The lead guitarist then takes a turn on the platform while Adam disappears for a short but a well-deserved breather, and we hear an impressive long guitar solo. Adam returns to the stage looking every inch the star in a cerise suit and a catchy beat fills the room. The crowd are clapping in time as the tempo of After Hours builds like a classic club anthem.

He hasn’t really said much to this point, preferring to jump from one track straight to the next, but now takes a moment to have a wee chat with his fans. He thanks Melbourne for coming to see his show on the “Aussie” leg of the tour.

He tells us that The Original High tour is a journey, and that there are evils in this world, but it’s up to us to fill it with love! “Fuck that darkness” he pronounces. He took us back in time with a heartfelt rendition of Mad World from the Donny Darko soundtrack and then back to the happy feeling sounds with There I Said It.

A single blue spotlight on a darkened stage set an appropriate scene for Another Lonely Night and I suddenly noticed the lack of cell phones illuminated throughout the crowd. This I have become accustomed to seeing at concerts in this digital age, and it was nice to see the audience engrossed in the performance instead of being busy recording it on their tiny screens! All eyes were on Adam and captured by his theatrical presence.

Another short interval begins as coloured disco lights bounce around the Palais Theatre, and graphics that remind me of 80’s video games dance on the big screen.

Then as if to say ‘Yeah we are 80’s babies’, he returns with his stage mates all dressed in 80’s/90’s fashion! The male backing dancer is now in multi coloured overalls and a green baseball cap, and his lady colleague in fluoro hot pants! Adam is now in green cargo pants and adorned in a shiny gold bomber jacket as he gives us The Original High. The lyrics really do have a reminiscent feel to them, reflected well by their choice of outfits, this one is bouncy and anyone who wasn’t already on their feet, certainly are now.

He surprised us with an absolutely awesome cover of David Bowie’s Let’s Dance, of which I’m pretty sure the legend himself would have been proud of! This performance was certainly deserving of the roaring applause it received! He also gave a nod to Queen who will be joining him later on in his tour, with Another One Bites The Dust.

At the very end he introduces us to his awesome band one by one, and lets them take the spotlight for a solo each as he sits to the side and takes a much-needed rest! I really have no idea where this guy gets his energy from!

I was beginning to wonder if all the true artistry will be buried along with greats such as Bowie, but Adam Lambert is living proof that the theatrical side to music will live on in the next generation.

I left tonight having had an absolute ball, smiled heaps and enjoyed every second of his performance! I’m totally sold, and if he returns to OZ, I will most definitely go see him again!