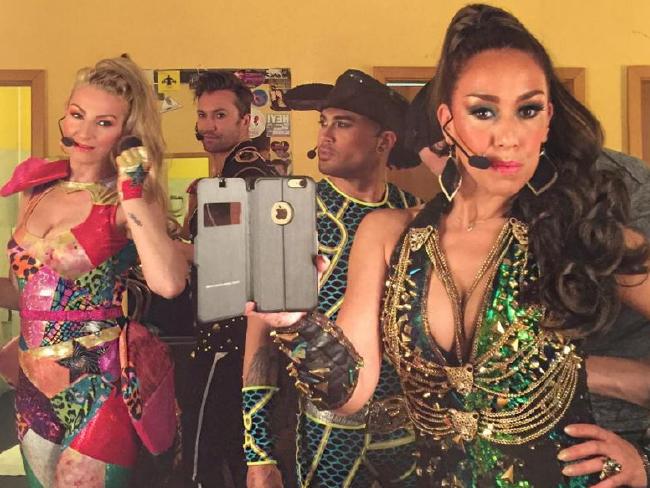 When I think about the Vengaboys, it brings me back to a time when I was managing a music store in the South Eastern suburbs of Melbourne.

With their catchy tunes and eye catching video clips and having sold over 25 million albums, I could not miss out on interviewing Kim Sasabone, one of the original members of the group..

After a brief phone technicality we finally connect and Kim speaks to myself over the phone to answer a few questions I have put together..

Hi Kim its Live and Loud calling how are you?

I’m very well and yourself, it’s nice to speak to you

The Vengaboys are coming back to Australia again.. Are you excited?

Yeah we are very excited it’s always a big thing to come back Down Under, it’s been almost 4 years now since the last tour. Especially with autumn coming its freezing here so we need to get to warmer places and it’s warmer down there.

The Vengaboys name how did that become about?

Oh wow that’s a long time ago, I don’t really have a memory but it was in 1996, we all met each other at parties, beach parties organised by producers, then we met each other and we made music all together and that’s how it started in a nutshell..

The Vengaboys disbanded , stopped performing in 2002 and came back in 2007, what happened in that time?

It was a bit shorter it was only 2 years and we stopped in 2004 and restarted in 2006, taking a little break, we had been touring around the world for 7 years and we were in our 20’s. That’s kind of a big deal you miss out on a lot of stuff.

All the birthdays, families, friends and stuff, we were all ready to be a little bit normal. We did that for two years and then we needed to perform again.

Performing now to when you first started is there any difference or do you find it exactly the same.

Well first of all I just turned 40 this year, it’s a little more exhausting when your 40 compared to early 20’s. But other than that the pressure isn’t that big anymore. When you have a #1 worldwide hit there is a lot of pressure. A lot of people want different things from you around the clock. We just do one track every 1 year to 2 years; we are not in a hurry we do like 120 shows’s a year. So we still work hard so the pressure isn’t too hard.. Your older so you don’t party 7 days a week.. Now it’s only 6..lol

Do you still get the same response from fans compared to back in the days!

Yes of course people who buy tickets for the concert know all our music and all the lyrics, they sing along and dance along it a nostalgic trip for them as well.

Being in the industry for so long, what is the biggest change that yourself or group has seen in the music industry?

We made that transformation from CD to digital. We were in that process. We were coming in at the end of CD’s that era. We sold a lot of CD’s, for a music artist that’s a big difference.

It’s all about seeling cd’s in the new period that all different now. That’s the biggest and also for 20 years now there is a lot more to offer and the quality is so much better.

When you come down to Australia for the concert tour, if you get any downtime what do you plan to do..

We don’t have a lot of time off because there is either concerts  every day or we travel. Sometimes we have one or two days off and in almost every city we have friends in every city that we know. We like to meet up with people as we don’t get the opportunity all the time. We just love hanging out , going to a nightclub or going out of the city, seeing nature..

So maybe some sights such as the Opera House, or Bondi Beach?

Exactly yes just enjoy being there..

Thanks so much for speaking to myself today I really appreciate it..

Thanks for having me and I look forward to catching up with you when Im in Australia..