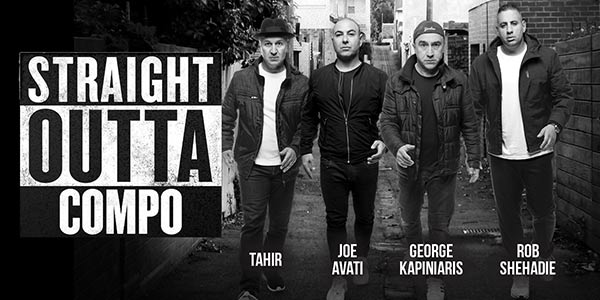 Speaking via the phone with Rob Shehadie  today,  with a career spanning 18 years, whose name is amongst the funniest Australian shows ever to screen on our TV’s.

Having starred in Fat Pizza, Houso’s, Swift and Shift couriers and of course the highly successful comedy Here Come TheHabib’s, Rob’s wasn’t always destined to be an actor, as he explains he was one step away from representing Australia as a rugby player at a junior level..

Here Come The Habibs has been a highly successful comedy debuting on the 9 network with Rob co-creating and consulting for the show which is a big change from previous work. As Rob explains it’s something that everyone can relate to, it draws families into watching  the show together, everyone has one of those neighbours, a sister who is glued to social media, and the brother attending University it’s the true Australian way. It’s what people can relate to, I can remember watching George Kapiniaris on Acropolis now and now I’m working with him, he was my idol. But I watched the show religiously!

Rob credits Tahir as both a close friend and a comedy genius. “Most people don’t realise how funny and creative Tahir is”. Rob and Tahir have worked side by side from the beginning which was the start of Fat Pizza and as Rob points out he and Tahir are the ethnic version of Hamish and Andy. Rob says of Tahir “ He is just so funny and we work well together, we have each other’s back. He is basically the director of our new show Straight Outta Compo”.

The show itself is not all stand up comedy it’s a lot of sketches and we have a lot of fun on stage. If you come to the first show and then come to the 40th show you will see how much it has changed and we are always testing to see what the audience are enjoying and where we are getting the laughs.

Drawing inspiration from Acropolis Now ( which Rob would watch religiously as a child), he points out that comedy can be derived from all nationalities. Having watched stage shows Wogs out Of Work and Wog Boys,  Rob himself had his own stage show “From Lebanon With Love” at the Enmore Theatre which drew an amazing 70’000 people.

Focusing on the success on Here Come The Habibs, (which  will be back for a second season), it is something people want to see ,with the show averaging 1.7 million viewers. People love the show because  it’s relatable and it works.

Rob is also an avid Elvis fan, having visited Elvis’  home in Graceland and also had Elvis’ right hand man, the legendary Joe Esposito stay with him. “I have met a lot of great people , and a lot of people within  Elvis’ inner circles, Joe was a highlight you really can’t get closer than that, unless you meet Priscilla.. When Joe was in Melbourne last year, we caught up with Tom Jones which was great.