John Cena can only be described as a behemoth within the world of professional wrestling. In the world of the WWE (World Wrestling Entertainment) in this decade there has been no bigger.

Cena the face of WWE with his all American look and catchphrase of ‘Never Give Up’ amassing millions of fans and a following on par with the biggest rock stars and socialites.

Cena having just turned 40 years old in April has much to celebrate having proposed to his long time girlfriend Nikki Bella also a professional wrestler. 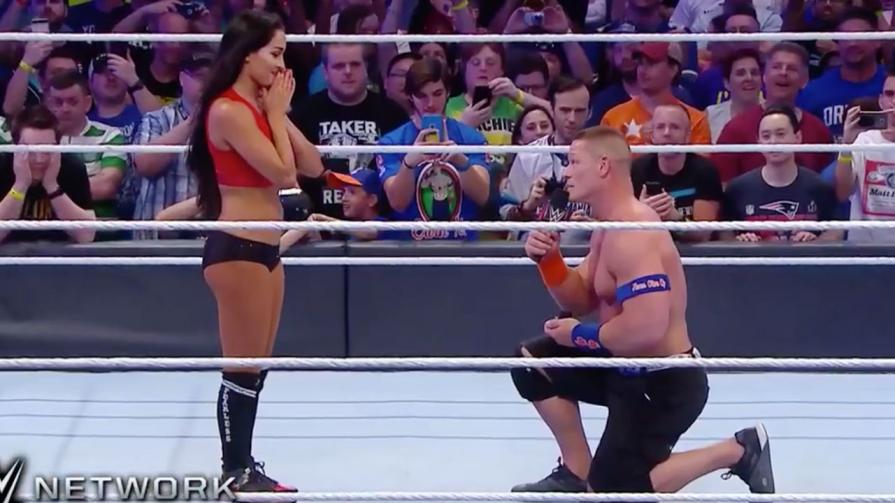 “ I had my heart set on proposing on New Years just because I thought it would be a rare occasion for both of our families to maybe be together and spend some time, and that’s exactly what happened. Upon thinking about it a little more, I’m very close to my family and Nicole is very close to her family and I also consider the WWE my family, I really couldn’t think of a better way of sharing a better moment like that, than the place I truly call home, the place where I have spent the last 15 years than any other place in the world. It’s the place where I feel most comfortable. It’s something that I look really forward to doing.

Cena also has a thriving career as an actor having appeared in 9 movies, his last being with Amy Schumer in Trainwreck where he played the character Steve.

“Originally it was written to be a big physical guy, then when we went to riff from a joke perspective it began to be a guy who obviously has some insecurities and in another level of that had a little bit of sexual confusion and I just ran with that. It ended up being funny but if you look at the character it’s a very small movie, you get out of it what you put into it. Amy Schumer and Judd Apatow were really generous and allowed me to explore and really create something out of thin air. I created this really big guy who was really vulnerable and really wanting the white picket fence and the life that everybody pictures and really confused about who he was.

Cena is currently shooting the sequel to the 2015 smash hit Daddy’s Home. The sequel brings back original stars Will Ferrell and Mark Wahlberg, as well as Australia’s own Mel Gibson to the cast. The movie itself is shooting in Cena’s home state of Massachusetts.

“Im actually doing two projects at the same time, I am shooting ‘Daddy’s Home 2’ and a movie called ‘The Pact’, one is in Boston and one is in Atlanta so I’m going back and forth between the two which is abnormal, but as you will find out in the forum (John’s Untold Story) I’m a pretty busy person, I like to stay busy and I’m sure question’s about this will come up in the forum, it really is good to do a movie so close to home. A few of the days, we shot in a small town of Lawrence which is pretty close to West Newbury which was a nice little treat where you can balance work and family.

Cena’s work ethic is second to none, since joining the WWE in 2002 where he debuted to little bit of fanfare after accepting an open challenge from WWE veteran Kurt Angle that he lost. Cena who has been hailed by his peers as the greatest wrestler of all time has become the face of the WWE having held the WWE World championship 16 times tying the record held by WWE legend Ric Flair.

“I think it was just getting the courage to believe in myself and at the same time realising that opportunity was right in front of me. So many times in our industry you hear people say I’m just waiting for my chance! Every time you lace up your boots it’s a chance, every time you perform in front of an audience it’s a chance. Luckily I found that out very early on in my career, I debuted in WWE to a little bit of fanfare and that’s only because I was put next to Kurt Angle whic was a really wonderful moment in my career which is something I will never forget. After that I really tapered off into the land of the forgotten and it was because I really wasn’t taking advantage of opportunities and then finally almost weeks before I was to be let go I said I’m going to go for broke and that’s where it all started.

Having the world at his feet and being adored by millions of followers around the world what has he sacrificed to get to the top?

“I wouldn’t have sacrifice anything I live my life exactly how I want to, I don’t live a normal life by any standard, its not a 9-5 job by any means, but everything I do is a conscious choice of what I want to do, I think that’s what allows me to keep doing this at a level that I am doing. I don’t look at it as a sacrifice; I look at it as the fact that I get the privilege to do this as a job. Its something that very few can say”.

Cena has also been known and praised for his charity work with Make A Wish Foundation as he has currently granted over 500 wishes for ill children who have wanted to meet the star. This is a record for the foundation dedicating his time to allow unfortunate and sick children time to spend with him.

“It’s a very intimate setting; one thing I want to focus on is certainly giving the audience enough time to ask me whatever they want. I don’t ever see myself writing a book so I’m always pretty comfortable speaking in front of an audience and my life ha pretty much been an open forum for the WWE audience for the past decade and a half and certainly in the reality world for the past three with my relationship so I don’t see any reason to hold back the details of my life. I’m not ashamed and don’t regret anything. It sure will be a one of a kind experience for anyone that shows up. Nothing is off limits”.

I rarely do that scenario with any sort of journalist.