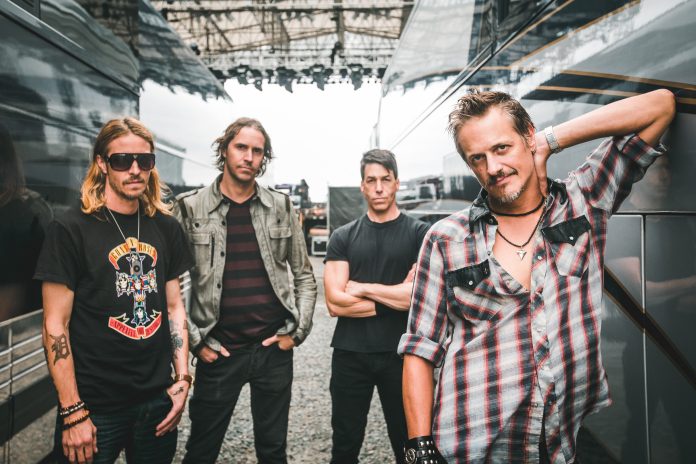 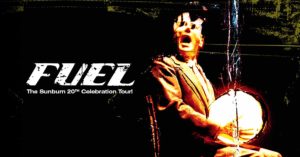 Thanks so much for speaking to Live and Loud today Brett I really appreciate it.

Steve – First and foremost, Fuel is coming back to Australia for the first time in 17 years beginning in December g your way around the country. What has taken the band so long to come back to Australia?

Brett – “You know the hurdle’s of life I’ve been talking about it with my manager for years, trying to find the right way to do it and not lose my arm in the process, basically it’s just been timing you know, the timing has been bad and luckily we have the right package together and the right promotion company, we were able to finally get the package together where we were able to do it, we are excited to see you guy;s again.

Steve – The band originally formed in 1993 you then released the critically acclaimed album featuring the amazing hit single “Shimmer” in 1998! Can you believe it has been almost 20 years?

Brett – “Time flies, you cant stop the clock, there’s a lot of bands in the 90’s that we started out with that were great at the time, but you don’t hear about anymore and their songs are forgotten about and that’s not necessarily the case for us, so lucky to be a part of that. Its exciting 20 years later here we are still going at it, loving life cant ask for better.”

Steve – Starting off in the early days of your career in the local pub scene was that your intention, to be a musician and a rock star and hit that peak and have everything all at once?

Brett – “I think the goal for me was to always be successful in music, it was always my passion, to be a part of gold and platinum sales has  always the dream and the goal and luckily for me that came through.”

Steve- What’s the one thing that you are still wanting to achieve if anything?

Brett – ” You know, i just want to continue what I love to do and be creative and, I enjoy being my own boss. I enjoy rostering my own time and being creative and writing music and being dedicated, that way I can support myself and family. That’s right is what I enjoy doing and my hope for the future as well.”

Steve – In 2004 you decided to part ways with the band to pursue other projects, did you regret making that decision at the time?

Steve – During that break Brett you managed to play with a couple of guys from the doors, what was that experience like?

Brett – “That was a big eye opener for me, you know those guys are such incredibly talented player’s,. That catalogue of music is far off the beaten path for me so to speak when it comes to comparisons from Fuel to the Door’s its completely different, exciting and challenging and refreshing too. The way that those guy’s play, they  are a full on bands band, you have to keep an eye on each other so you know where you are in the song. That wasn’t necessarily always the case with Fuel, the song’s were more basically strutted then the Door’ catalogue and my performances wren set up for Ray and Robbie from the Door’s  perform. Those guy’s would just jam and feed off each other and eye each other and say now let’s make the change whereas with Fuel I know where the changes are because you know they are always going to be there. That was one beautiful playing with Ray and Robbie at the doors and just learning how to be that type of musician and that type of  player.”

Steve – When you come down to Australia, what can the fan’s expect from Fuel, are we going to hear the classics or any new material coming out?

Brett – ” You know Rock and Roll is what to expect, it’s been so many years for the Sunburn album so we are going to play that record and we will play the songs off that album and we will play some of the later song’s off  later album’s from Something Like Human and Natural Selection’s and even Puppet String’s, so yeah it’s going to be a fun night.”

Steve – Now I heard a rumour that you guy’s are about to or shortly real ease a new album, is that true?

Brett – “I’ve got one new music that I have been working on, I don’t know when or if we can consider a full length album,. You know the music business is so different, I think for me these days, it’s more about me being creative and writing,  if there is a full album there or a double disc or just a few song’s you put out what you’ve got with music these days you don’t have to put out full length album you just put out what you’ve got and then a few song’s a few months later, it doesn’t all have to come out in one big shebang anymore,”

Steve-  Being in the music industry so long, what is the biggest change you have seen?

Brett – “The industry itself has been somewhat in disarray to a degree, its starting to stabilise I feel like again, you know throughout my life I have seen the industry change from Vinyl to 8 Track to Cassette to Cd and then from CD to MP3 wave files and thing’s like that, the industry itself is always evolving and changing  and looking for new ways to absorb content. File sharing and the tangibility of the product being gone is a little bit of a shocker to the system. I think its taken a while for things to adjust and still taking time to adjust. The record labels I thick they have finally done what they have been trying to do for decades now which is control everything! The artist gives the label the music for so long now the labels have paid the artists for sales, these days its not so much the case because they sell the rights to companies like Spotify and these companies pay the record labels and it doesn’t get distributed back to the artist. That is something they have been trying to do for a long time and now they have finally done it. We need to look at those issues for sure and try o make it a little more stale for the artist supplying the content.”

“Im afraid one day the guys who are truly talented songwriters and artist are going to say “Yu know what I just do tho for a hobby I don’t care about it because there is no money in it so why be in it, why be a musician. There is a far gap to, you are either bringing it in or you are not bringing it in.”

Steve- If you could go back in time and change one thing if anything what would it be?

Brett – “You alway’s want to try and make the best decisions you can, I can’t point out certain bad decision’s in my life, Im sure there are a lots of deals that didn’t happen when they should have happened, I also think I know a lot more now to when I started in this business. When you are in the hurricane of hit songs and things re moving rely really fast around you for the first time in your life, its hard too stop and smell the flowers so to speak and its hard to see whats happening around you, probably I could have stopped and looked and around and became aware of things from time to time.”

Steve – If you get any downtime while on tour, is there anything you would like to see or do?

Brett-“I just want to walk the streets, meet the people and see the people, jam eat great food and drink awesome beer and have a great time.”