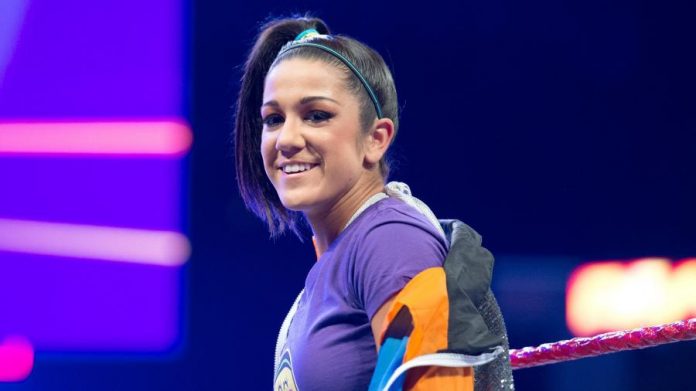 WWE Superstar Bayley is your all American girl with her signature ponytail and free loving attitude and former RAW women’s champion.

A self proclaimed hugger in her own right who has won the hearts of fans from young to old, a crowd favourite by far.

Starting her career with WWE in 2012 as part of NXT and spending the good part of four years in the development program, Bayley moved to the main roster and stamped herself as a WWE Superstar.

What do you think has been the main difference between NXT and WWE?

NXT is obviously on a small scale, the fan base for in NXT I always saw them as family, they saw us grow together, they all saw us start in this little tiny spotlight with 20 people in the crowd, then grow and grow inside Florida and then all over the States and the overseas. They watched us grow from the ground up and have been very loyal to us and know us very well. When you move to the main roster you have to reintroduce yourself. In NXT you are there to develop your character, whereas in WWE you try to get your face on TV because there are so many people on the roster.

What is the best advice you have been given coming from NXT to WWE?

Some of the best advice I have been given in my career was from Dusty Rhodes was to be ourselves! When you first start in NXT and trying to get on TV and during promo classes everybody was trying to be who they were not, they weren’t trying to be themselves. Dusty would literally stop what we were doing and say “Just be yourself” you can see it in your eyes and feel it in your heart, the fans will know when you are not being genuine and you will lose ground. Thats when everything clicked for me and I started my Bayley character, that just stays with me to this day, I will always remember that.

Bayley also appears on Raw with her best and closest friend Sasha Banks, as of recent times there seems to be some tension between the two. Are they still as close as they seem?

“Ever since the Royal Rumble and Sasha eliminated me, it has been every woman for herself. She had to do what she had to do, but last night seemed more aggressive from her, I don’t think it had to go that way. We have never had any personal issues outside of the ring it has always been inside so I always see it as a professional choice. If she really does have a problem with me, then that’s something we have to solve and last night at Elimination Chamber, that really did bother me”.

What more do you think the WWE can do for the Women’s Division?

“We are exactly where we want to be at, be Main Eventing at Monday Night Raw and all the Pay Per Views, as long as we can keep these matches going then I think that we will finally be ale to e on the same level as the men. I think the next goal to finally prove that we are equal is to co main event Wrestlemania. Once this happens, I think we are good for the rest of time”.

The Women’s Elimination Chamber was a great success and fans are loving what they saw, how do you think it went?

“I haven’t been able to read any tweets or anything like that, I think I have just been on such a high since last night. Its just been incredible to know that we are doing all these matches and being able to do the same, shining the spotlight on the guys and we all put a lot of pressure on ourselves to make them gives us these opportunities. They don’t think that they have made a mistake so we do put a lot of pressure on ourselves to make sure we have a really good performance. I feel like last night everyone did such a great job, really making this History making match a memorable one”.

In recent years women have had cage matches and ladder matches and the rumble as well as yesterdays Elimination Chamber. What would it mean to you to be in the first Womens main event of Wrestlemania if that opportunity was to come about?

I know that’s everybody’s goal in the locker room, whenever you know before all this women’s evolution started before I even go to NXT, being a kid that’s everybody’s dream. Anybody who has a dream of becoming a wrestler and making it to the WWE wants the main event at Wrestlemania, so that’s something that has bee on my mind since little and now it’s like literally possible. Its gonna happen someday and knowing that I could be part of that makes me emotional

What do you think of the Aussie’s making their way through NXT?

“I have always been a fan of Peyton Royce , I think she is like, she has had big matches, she has had title matches but I don’t think she has had her time to shine. She is so good she is like me. Her and Billie Kaye have been fans since they were little kids, they love the business, they know the business and once they get here they will turn the women’s division upside down. I love them both”.