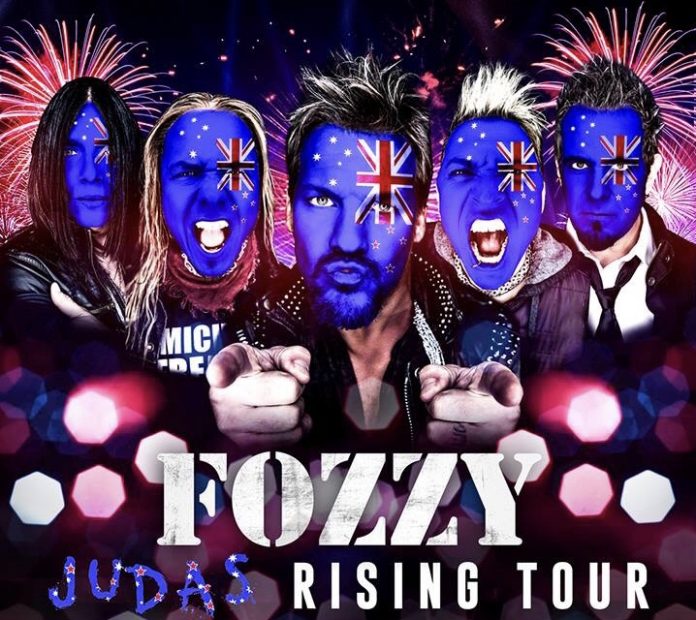 Chris Jericho is one talented individual, an actor, wrestler, producer father and husband. Better known for his stint in the WWE where Jericho graced our living rooms night after night under the pseudonym Y2J. Is there anything he cannot do?

There is of course another side to Jericho that attracts a different fan which is growing bigger by the day, Jericho is of course the lead singer of rock metal band Fozzy. 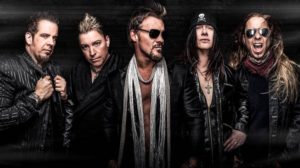 After 7 studio albums Fozzy released their latest album offering Judas in October 2017 which to this date has amassed an amazing 23 million you tube hits.

Fozzy are finally working their way to Australia having not toured our shores since 2013 for the now defunct Soundwave Festival.

Live and Loud was fortunate to speak to the amazing frontman Chris Jericho.

Hi Chris, thanks so much for speaking to Live and Loud today I really appreciate it.

You are a very talented man, is there anything you cannot do?

“Im not very good at fixing things, Im not a handyman, not good at all”.

Chris can you please clarify somethng for me, how did the band come up with the name Fozzy?

“Kind of a long story, the thing that is cool about it, it’s the easiest thing to chant which is great. Anytime you do a show, where we play in between songs, the fans will always chant the name which is really cool”.

Did you play in bands before Fozzy or is this the first time?

“I’ve been playing in bands since I was 13 years old”.

With the Fozzy and their new single Judas which has amassed an amazing 23 million hits on YouTube, Fozzy is going from strength to strength, did you expect it to be this big?

“Nobody expects success like that, we have had a lot of successful songs in the past, nothing this big. When you have a hit single it changes everything, we are on a lot of different radios, a lot of great things have happened, which sets it up for when Judas the album comes out. When the record came out today there was such a huge buzz about it, just a great reaction because people were really looking for it. It was just a really cool time for us to have an epic hit which is still growing, that’s the best thing about it and it hasn’t even finished it’s run yet”.

How long did it take to complete the album? And was it difficult to work around you WWE commitments?

“You don’t combine the two, I finished up with the WWE in May knowing that it was Fozzy time and I have been working with Fozzy for the past seven years and when I’m not with Fozzy time I’m in the touring cycle and wrestling matches. I will go back to wrestling matches if its right, if not there are still there are other things going on! Wrestling is never at the same time as Fozzy. But I’m not a full-time wrestler anymore”!

How did the song writing process work with the band?

“Basically, Rich Ward writes the music and I write the lyrics, it’s a bit of a therapy session with the song writing, it helped is hone the songs and the chorus, melodies. It is more in line of what’s best for the song and we have embraced that philosophy. We suddenly just churn out good song after good song after good song to the point where this is like 1987 where hysteria or the black album, there were so many good songs on those albums probably 6 or seven on the radio. This album is like this as well, we think even as popular Judas is and sounds, there are still two more songs on the record which in the expert’s opinion are as good as Judas or better. We just thought that Judas was a great way to start and release it as the first single for people to hear and see what we are up to and what we sounded like. Painless is the next single off the album and I think it will do even better than Judas, that’s what people are thinking”.

How did you think the sound on the new album relates to some of the band’s previous work?

“When you talk about the lyrics for Judas, they are very dark words, I didn’t write them I just have to sing them. I have to try and mentalise through my own psyche and find out to me fits with those lyrics, so I can sell them. You know Judas as a song, the lyrics are very relatable, its something that we can all understand, having that voice inside that tells you to do something, even that you know it’s wrong. Having that last drink, even though you know you are going to throw up, you know that last piece of pizza, even though you know you have eaten too much, cheating on your girlfriend or whatever it may be making the wrong decision, you know that and that’s what Judas is all about and it’s a song that everyone can relate to. Judas as a song is popular”.

Fozzy is touring everywhere, you have been touring London and all-around America, when can we see Fozzy downunder?

“We can’t wait to come back, and it’s something I get asked multiple time with all the press in Australia. We started in Australia in 2006 the first time we came over and right off the bat your country embraced us, it was one of the first countries outside of our own that really understood what Fozzy was as a band, we were fortunate to come to Australia twice in 2013, once with Metallica on Soundwave and once with Steel Panther, we cant wait to come back, I don’t know why we have waited so long, it’s not my decision. Good news is that with all the buzz for Judas now it’s a matter of time. Let’s do it right and ticket sales 3 month before and just have a good time with the return of Fozzy in Ozzy. We love Fozzy Fozzy Fozzy Oi Oi Oi,  nowhere else do we hear that we are excited to hear that again”.