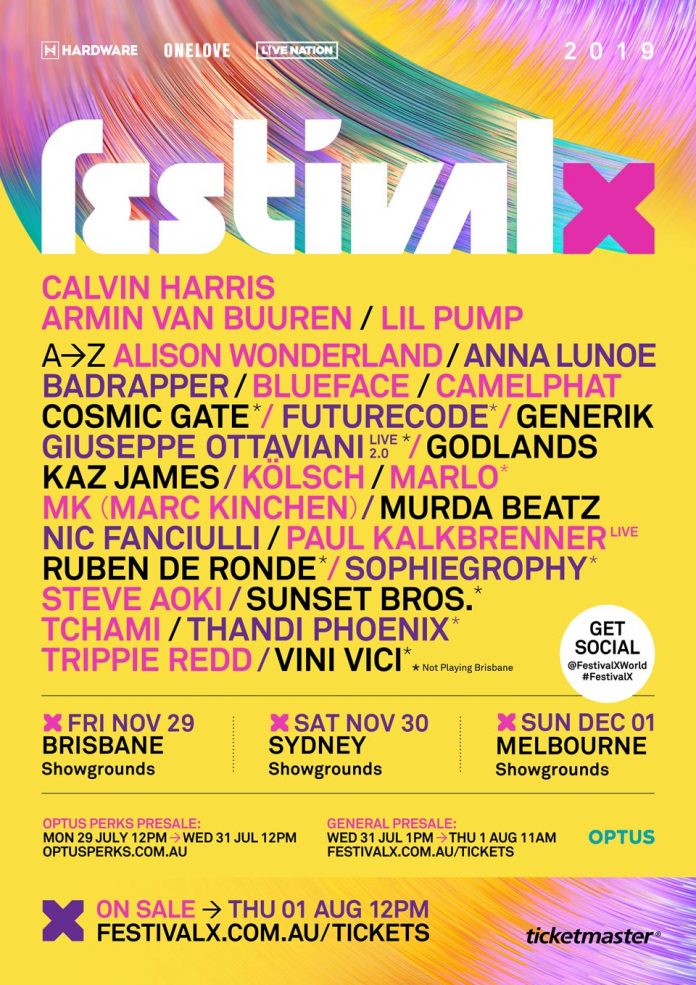 LOCAL SUPPORTS TO BE ANNOUNCED..

Australia are you ready?! FESTIVAL X launches this November, welcoming Summer and will feature some of the world’s biggest superstars! The inaugural festival lineup features Aussie favourite and multiple Grammy, Billboard and Brit Award winner, the inimitable Calvin Harris. Grammy award winning, heavyweight producer, DJ and songwriter Calvin Harris stands as the figurehead for modern dance music, having broken world records and dominated the charts with his many hits. As one of the most successful artists of all time and the most played Scottish artist of the 21st century, Calvin Harris has collaborated with global stars including Frank Ocean, Pharrell Williams, Rihanna, Katy Perry, and Ellie Goulding to name a few. His work has garnered a number of music awards and nominations, including 16x Brit Award nominations with 2x wins this year for Producer of the Year and British Single (One Kiss), 14x VMA nominations, 5x Grammy nominations and a 2013 Grammy Award win in the Best Music Video category for “We Found Love”. Calvin’s single, “One Kiss” with Dua Lipa was the biggest selling single of 2018 in the UK and marked the fastest ascent to #1 in Dance radio chart history. Following “One Kiss,” Calvin released his hit “Promises” with Sam Smith, which spent 14 weeks at #1 on the European airplay chart. His three singles released in 2018 amassed over 2 billion streams. To date, Calvin has over 23.5 billion combined audio and video streams in his career history, making him one of the most viewed artists on YouTube & one of Sony’s biggest streaming artists.

For more information on how to purchase, visit: optusperks.com.au or download the My Optus app today.

Then General on sale at: 12pm Thursday, August 1st via Ticketmaster: http://fstvlx.co/tickets