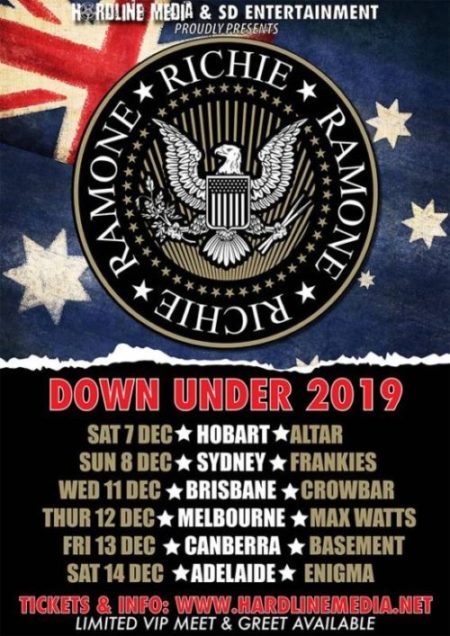 Aussie punks and rockers get ready for a full throttle set with Richie singing lead AND drumming, or mic in hand, front and centre … in the crowd, sharing the mic around to fans – an in your face, high octane show with all the intensity of a classic RAMONES performance, with that extra Richie rockin’ kick.

The famed punk drummer is best known for his time on the stool as the drummer for the RAMONES and is the only RAMONES drummer credited as the sole writer and composer of six RAMONES songs. He is also acknowledged as being the only RAMONES drummer who ever sang lead vocals in some tracks. Richie joined the band before the release of “Subterranean Jungle” in 1983. He went on to perform on RAMONES albums such as “Too Tough to Die”, “Animal Boy” and “Halfway to Sanity”. Most notably, he wrote the hitRAMONES’ song “Someone Put Something in My Drink”, which is featured on the album “Ramones Mania” – the first RAMONES album to go platinum. He also penned songs “Smash You”, “I’m Not Better Now”, “Humankind”, “You Can’t Say Anything Nice” and “I’m Not Jesus”. Richie’s songs “Someone Put Something In My Drink” and “I’m Not Jesus” have been covered by many bands, including CHILDREN OF BODOM andBEHEMOTH.

“Richie’s very talented and he’s very diverse . . . He really strengthened the band a hundred percent because he sings backing tracks, he sings lead, and he sings with Dee Dee’s stuff. In the past, it was always just me singing for the most part.” – JOEY RAMONE

He has also worked on some of DEE DEE RAMONES’ solo recordings, and in bands the ROCK N ROLL RATS andthe GOBSHITES.

This December, Richie arrives in Australia fresh off the back of a packed run of shows in the US and South America. And after the release of his highly commended book “I Know Better Now”. He is also set to appear in a horror/comedy flick ‘“Headcheese” later this year.

From behind the kit, to amongst the pit – you will not want to miss RICHIE RAMONE live in action!

Friday, 26th July At 10:00am AEST ONLY AT: www.hardlinemedia.net