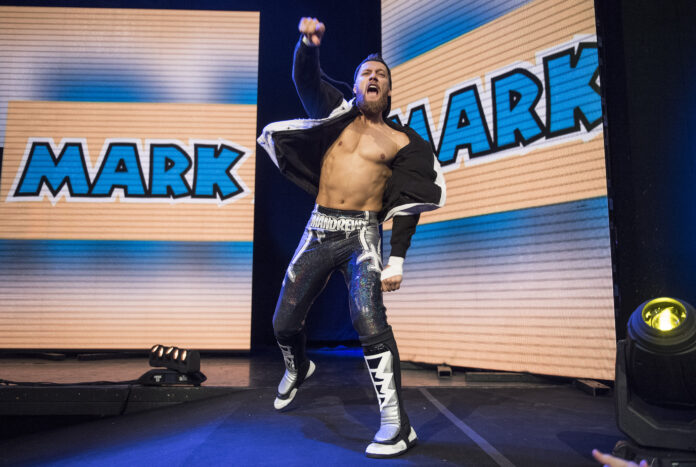 Wrestling superstars come in all shapes and sizes, with varying backgrounds, from teachers to dancers many of them athletes who seek superstardom on the biggest stage of them all in front of thousands of fans while performing their craft. There is one NXT Superstar who is making a name for himself, not only in the ring but as a professional singer for his band Junior.

Meet Mark Andrews, born and bred in the UK, Andrews began his passion for wrestling at the age of 13 where he would wrestle for many different factions before landing in the WWE’s development program NXT.

Having participated in many wrestling factions including Chikara and progress wrestling, Andrews has finally found his calling in the WWE as part of their development program which was created by WWE Superstar Triple H.

While many people have someone write their entrance theme which introduces them to the adoring crowd, Andrews being a professional musician took it upon himself to create his own!

“I think entrance music is one of the most important things for a wrestler in their whole act really. It gets you psyched up before the match, and I think whatever is getting you psyched before a match is also there to get the fans psyched up as well”.

“I think about the big Mania entrance where my band is playing, I think every wrestler does as that’s the main stage, the grandest of them all the peak. Everybody wants that moment of the big entrance, live music is so exciting, so to mix live music and live wrestling, there is nothing better than that”.

Junior was formed in 2013 by guitarist and vocalist Matt Attard and bassist and vocalist Mark Andrews. Junior self-recorded and self-released their first E.P This Town Sucked Anyways which showcased their ability to pen a catchy song. The band gained increased exposure using their track A House That’s Not Quite Home as Marks wrestling ring entrance music and Junior was met with acclaim from both fans of wrestling and music.

After being scouted by WWE, Mark competed in the UK tournament where he used Fall To Pieces as his ring entrance music and continues to do so.