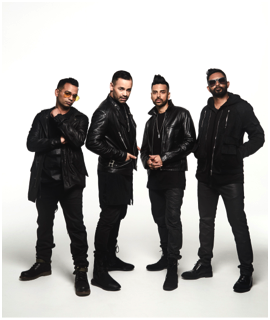 The group was CDB – Andrew De Silva, Gary Pinto, Brad Pinto and Danny Williams. The group was well received and signed to Sony Music in 1994.

Live and Loud was fortunate enough to speak with Andrew De Silva about the resurgence of CDB.

I had to begin by asking Andrew a very important question:

Andrew can you please explain- what does CDB actually stand for/mean?

“People have been trying to work it out and the reason it was shrouded in mystery was that we first formed in high school, and it actually meant Critically Def Boy’s!  When we signed to Sony we said no we are not going to be Critically def Boy’s because people knew us as CDB. Then on our second album we announced the meaning meant Create Dream Believe”.

How did you guys become CDB?

CDB signed to Sony in 1994, you released of course Earth Wind and Fire’s Let’s Groove which reached #2 on the Australian Aria Chart – What was that time like for you guys?

“Well it was just like a whirlwind, the RnB and the sound was so fresh in Australia. We used to do in stores, everyone used to think we were from the States, they have never seen guys sing and do harmonies, that real new jack swing sound as well. All that sound was so unrecognized, we were one of the first to do it in Australia.. It was so much about the music for us, it was an amazing time for us. We came from the 90’s as well, live music was really big and important back then”.

What was your highlight from that time?

“There were so many, but i guess the one that really stands out would be at the Aria’s where we picked up highest selling single of the year. That was an amazing time in our lives. We have supported a lot of acts from the States, Boys 2 Men, KC and JoJo, a lot of Rnb acts that we got to support and meet”.

“I love his slow jams, he is such a great love song writer, he knows how to write Rnb and sexy kind of music. I can’t wait to meet him. We actually do one of his songs on our new album (I Want Her)”.

CDB disbanded in 1999 but reformed again in 2000 for a few charity shows. `Was it hard to get back together?

“I think we did a one off show, we also did a show about a year and a half ago to 2 years ago. And every time we do a show we always hear exactly the same thing, when are you guys getting back together?. I guess for myself I do a lot of other things, I do production, a solo career as well as other bands. In 2012 I won Australia’s Got Talent. It’s just about the people. I think so many people have asked, when are you guys going to do some recording again. I think the 90’s right now is so huge, you know its something that I would go out and do myself. You can’t force something on the market. There has to be a need and timing is everything and I think it’s the right time to do it”.

Is there anything you would have done differently to when you first started?

“Of course, I guess it’s all the business, when you are that young, you don’t know your head from your foot. I guess the main thing is we survived it, no one went to rehab, we are all good”.

How did everyone feel about getting back together?

“We were all excited and wanting to do it. We all started dancing again and just laughing realizing how much we actually remember. We kind of just did it. We are all surprisingly fit, we are not young anymore but we are still young enough. We all look after ourselves. Back in the day we ate what we wanted to eat, drank what we wanted to drink. Our kids can’t believe we are dancing they are loving it”.

TAILORED FOR NOW is the new album with the first single being Montell Jordan’s ‘This is how we do it’ What was the vibe like to get the album done?

“One of the greatest thing now is how quickly we recorded this album. To record an album it took about 9 months, this time it took only two months. We worked fast 4 hour days on this, we did it from my studio, and someone else’s studio, emailed across vocals, just a different world. It was just a joy to do as well. This is the music that we listened when we were 16, 17 and 18. This is the music we went out to., nightclubbing, relationship’s were involved to, girlfriends and all that sort of stuff. This is why we got together in the first place”.

Has anyone not allowed you to cover one of their songs

“The law is you can basically cover anything, you cannot use there recording’s. You cannot use anything. I can do a Michael Jackson song and record it anytime I want to but you have to change the song. All those songwriters who write these songs are going to get a cheque in the mail and be like wow Its been covered by someone in Australia. No one is going to complain”.

Any plans for an album with original works?

“Well I think this album is part of opening the door again getting everything back in motion and showcasing some original music again. We write all the time”.

Yourself Andrew have been busy of course winning Australia’s Got Talent in 2012 – Did that reignite the passion to perform again.

“Well I never really stopped, that’s what I do for a living,  I sing 5 night’s a week , you know I decided to go on the show, it was a last-minute thing for me, it allowed for more things and bigger things, I signed to Sony and in 2013 I supported Mariah Carey as well as doing theatre and on a personal level I grew a little more. It really opened me up and on a personal level as well”.

And you did a Prince Tribute show and are now the frontman for Boom Crash Opera. Is there anything you cant do?

“That as well is something itself is very left of centre, one of the guys from the band gave me a call, maybe because I know the guys and I know the previous singer so well, Dale Ryder was the one who said no one else can do this gig apart from Andy, give Andy a call! There is  very much side of me which is Rock, there is kind of two sides of me the Rnb and rock. Its a very natural thing for me to do”.

“Purple Rain by Prince, the whole road goes into a dance its a beautiful song”.

What song do you wish you had written?

“In Need Of Love Today by Stevie Wonder”.

Aussie favourites CDB announced NEW shows in Sydney & Melbourne this August! In addition to touring nationally with Keith Sweat, CDB will be performing all of their past hits & tracks off their latest Top 10 Album: ‘Tailored for Now.’

Tickets for all shows are ON SALE NOW! 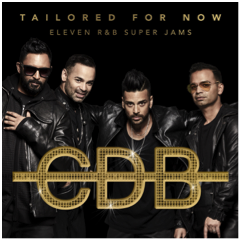