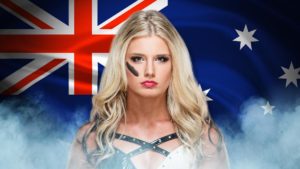 Toni Strom is a forced to be reckoned with. Fast steadily making her name among the best up and coming females wrestlers in the World of professional wrestling.

Since the age of 10  Storm has been an avid wrestling fan, watching i on TV, admiring her favourite wrestlers, Shawn Michaels, The Hardy Boyz and Micky James.

Growing up on Australia’s Gold coast with crystal beaches and warm weather Toni has only wanted one thing, to be a professional wrestler. Swapping the Gold Coast for Tokyo, Toni now trains in the Dojo from anywhere between 90 minutes to 3 hours

Starting from the age of 13 Toni began her training to become a professional and has never looked back.

With her gorgeous looks and her sensual swagger inspired by the 80’s metal scene, Storm is about to compete in The Mae Young Classic where she is determined to kick some ass.

Live and Loud was fortunate to speak with Toni

Toni you are a beautiful young lady, how did you end up in professional wrestling?

“I was 10 years old when I saw it on the TV and I fell in love with it, and I was living on the Gold Coast in Queensland at the time, and their was a wrestling company there that let me start training when I was 13 and from that day forward I haven’t stopped”.

When you told your family that you wanted to be a professional wrestler what did they say?

“Well my mum at the beginning was not having it, but I begged and begged and begged to start training as it’s all i wanted to do and she kind of realised that it wasn’t just a phase and that this was something that was going to stay. After a while she gave in she let me do it. Eventually some of my first events when I was starting out, she would come to some of the shows and she would help sell hotdogs at the stands, and now she makes a lot of the costumes I wear. She went from being not the most supportive to my #1 support”.

Were you a Tomboy growing up beating up all the boys?

Definitely a TomBoy (laughing) I would just be rolling around, I would always be mucking around with the boys, a mega Tomboy I always have been. Now I have to be a bit more of a female, but definitely a Tomboy at heart”.

You are currently residing in Japan at the moment!

“I moved to Liverpool in the United Kingdom when I was 18 to start building myself up and furthering my career but spend most of my time in Tokyo”.

What’s the one thing you miss about Australia the most?

“Everything, oh my god I miss the Gold Coast so much, it’s definitely where my heart is. The sunny days every single day whether it’s winter or summer., I miss everything and I only get to go home once a year I just miss it. I spent a lot of time in Surfer’s Paradise growing up and every time I go back  I spend all my day there.I just miss it”.

Speaking of Japan you are competing in the World Wonder Ring Stardom Shows, making a name for yourself winning the Progress Women’s Championship.

“I was quite stoked with that one.”

And just to confirm it was the first time females had competed in the main event!

“Yeah” It was our first main event, me and the girls really worked had to build a position and  progress it wasn’t exactly that we thought was going to be promoting women much at the time. We started on the small shows and build our way up. We just worked so hard to put on some really big matches to the point where we got on to the main shows and I’m still in shock that I am the first Progress Women’s Champion that’s one of my biggest accomplishments”.

With the resurgence of you winning the title and the WWE starting recognise females a lot more and create events, recently doing Money In Bank for the for the females wrestlers do you think the females will now be on par with their male counterparts?

“I think it’s going to go all the way, I think the main goal for all us girls is we want to be on par with the men and it’s really evolving. I don’t think it’s an error to be in  women’s wrestling because a few years ago there was no chance of a tournament, women’s wrestling wasn’t as respected as it is now, and now it is taking so much seriously and all of us girls, while we are in competition with each other we are all working very hard to promote it and to make it to the mainstream. Im proud of each and every one of the girls because we finally have a tournament and I am beaming with pride.

Back in 2014 you tried out for the WWE in Melbourne and then again in 2015 in the UK. Is that the ultimate goal to be a WWE superstar?

“Yeah it’s definitely the ultimate dream, it’s worth having from the beginning. At the same time I am enjoying the journey, I everything I have done, getting myself to the WWE. It’s been one heck of a journey, I have had some incredible highs and lows is all been worth it.

Speaking of the Mae Young Classic we have 32 girls including yourself and fellow Australian Rhea Ripley how do you think you are going to go?

“Im going to kick ass, I’m going to win it! They better look out for myself and Rhea. Australians are taking over the WWE. We have Emma, Peyton Royce and Billie Kay we have just come so far.There wasn’t much of a presence and now we have Australian women in the WWE and that is such a huge accomplishment”.

Toni if you weren’t a professional wrestler, what do you think you would be doing?

I have no idea, since I was 10 wrestling has just consumed my entire life everything I do , I don’t really have any other hobbies everything I do goes hand in hand with wrestling. Even my social life is with other wrestler and all we do is talk about wrestling. There was a point where I was in Uni and I studied nutritional medicine and I was heavily into , but I was more adamant about wrestling”.

If you could have one ultimate match with any wrestler alive or deceased who would it be?

“Oh my god so many greats hopefully a tag match teaming with Jeff Hardy”.

“Well I love to be on the WWE main roster but that’s for me to work on it so that’s the goaL”.