At the historic 2018 Royal Rumble, Shinsuke Nakamura won the Men’s Royal Rumble and Asuka won the first-ever Women’s Royal Rumble. Though The King of Strong Style declared that he would face WWE Champion AJ Styles at WrestleMania, The Empress of Tomorrow’s decision was interrupted by the sudden emergence of Ronda Rousey. 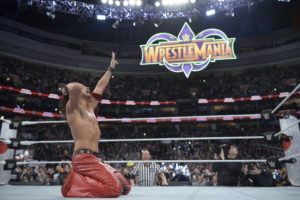