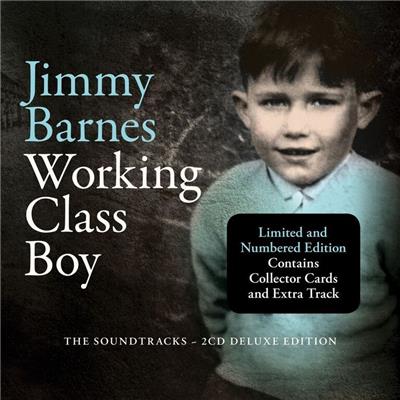 Jimmy Barnes ‘Working Class Boy’  upcoming movie will also include a couple of soundtracks to accompany the film.

As Jimmy says “After all the intense experiences with the book and the tour I thought I could finally try to put my childhood behind me but I was wrong. Somehow my mate Mark Joffe convinced me to let him turn Working Class Boy into a film so by the time you read this he will have told the same story to even more people in a different way. I trusted Mark to make a movie that was true to the raw feel of the book and the stage version. We were both fans of documentaries like “Senna” and “Amy” so we wanted to stick to that approach rather than doing cheesy recreations with actors. Both of us also respected the way Martin Scorsese’s film, “The Last Waltz” used some soundstage performances so we adopted a similar approach with parts of the soundtrack for Jimmy Barnes: Working Class Boy. We put together a much bigger band than we’d had for the stage production and there was no audience present for the recordings but we still captured everything totally live. Then a few weeks later I did something similar with the fantastic Australian Chamber Orchestra after Richard Tognetti wrote a beautiful string arrangement for a Randy Newman song that means a lot to me. It was a real career highlight and it’s now one of the eight soundstage recordings from the film which make up this album.”
Jimmy Barnes: Working Class Boy joins Jimmy as he retraces his earliest steps through the hard streets of Glasgow. It walks with him as he revisits childhood ghosts in South Australia, reflecting on the domestic violence, poverty and alcoholism that would fuel his life. The film sets this raw, and sometimes darkly funny story against a backdrop of archival footage and interviews with family and friends. Jimmy’s honesty and inimitable sense of humour create an emotional and compelling film of a damaged childhood, a broken family, a search for love and, finally, a genuine redemption.
The documentary also features some captivating musical moments. Elegantly filmed, Jimmy performs both solo and with Cold Chisel. He duets with his children, Mahalia Barnes and David Campbell, plus his brother- in-law, Diesel. An unforgettable new collaboration with Richard Tognetti’s Australian Chamber Orchestra is another highlight.
This landmark feature documentary is based on Jimmy’s acclaimed memoir, Working Class Boy. His self-penned book won the 2017 ABIA Award as Australia’s ‘Biography of the Year’ and spent a staggering 16 weeks at #1. It has sold over 250,000 copies, making it one of the biggest autobiographies in our country’s history.
Jimmy’s musical career is nothing short of remarkable: fifteen #1 albums in Australia – more than even The Beatles achieved; over 10,000 gigs across his lifetime; inducted into the ARIA Rock’n’Roll Hall of Fame … twice.
But none of these achievements eclipse the power and bravery of Working Class Boy. In telling this bare and brilliant original story on film, he has shown that it’s never too late to make new beginnings.
Jimmy Barnes: Working Class Boy releases nationally in cinemas from Thursday, 23 August for a limited release through Universal Pictures.

Deluxe version of the 2CD release is available for pre-order here and includes an extra track ‘Duke’s Waltz’ which was written and recorded specifically for the live show.
** Vinyl Album contains 8 songs from the Movie Soundstage only.