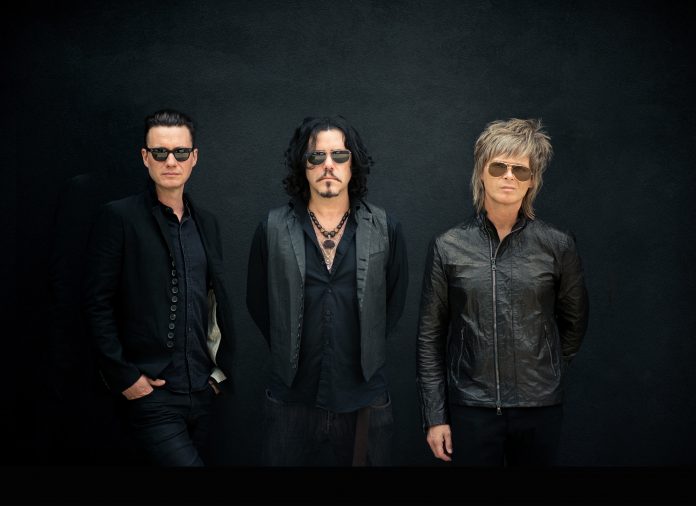 There have been plenty of bands that have come and gone, many one hit wonders never to been seen again

Having recorded seven studio albums 1 EP and 23 singles, toured the world and sold an approximate 1.6 million albums, The Tea Party briefly disbanded in 2006 before reforming again in 2011,  they have never looked back and are about to embark on their 17th tour of Australia backed by a 48 piece orchestra.

The Tea Party, Jeff Martin, Stuart Chatwood and Jeff Burrows is a Canadian rock band which officially formed in 1990 are not one hit wonders , having garnered amazing success in Canada and stating that Australia is their second biggest market.

The Group met in high school and officially formed in their early 20’s, with their name stemming from the infamous hash sessions of the beat generation poets Allen Ginsberg, Jack Keouac and William Boroughs.

Stuart pointing out that Allen Ginsberg even attended one of their sound checks, “which was pretty cool”.

The band’s main influence in their early days was the Beatles and Led Zeppelin, with their unique sound and drawing on Indian and Middle Eastern instruments.

As Stuart Chatwood (the bands bassist ) explains many bands of that era would experiment with different sounds “the Rolling stones did it and George Harrison of the Beatles did it with the Sitar (plucked stringed instrument used mainly in Hindu music and Indian classical music), so we created our own unique sound”.

The Tea Party found success on Triple J with their album The Edges Of Twilight which became a fan favourite with the youth of Australia.

Stuart explains “Australians have great taste in music, they elevate it to the next level and when they come to see our show with the orchestra it’s a magical evening that will bring you closer to the record” referring to their massively successful album Transmission.

Having been in the industry for so long Stuart explains the biggest change he has seen is the way people buy their music. “Sheet music was a massive seller in the very early days, then vinyl was popular, then CD’s took over and now the internet”.

“We are so thankful for Pau Drennan (TEG Head Of Touring) and TEG Live for bringing us to Australia”.

“We love to explore the wineries in Victoria and would love to take a drive down the Great Ocean Road if we get some downtime, also maybe a visit to Rottnest Island.

The Tea Party are in Australia presented by TEG LIVE on the following dates: