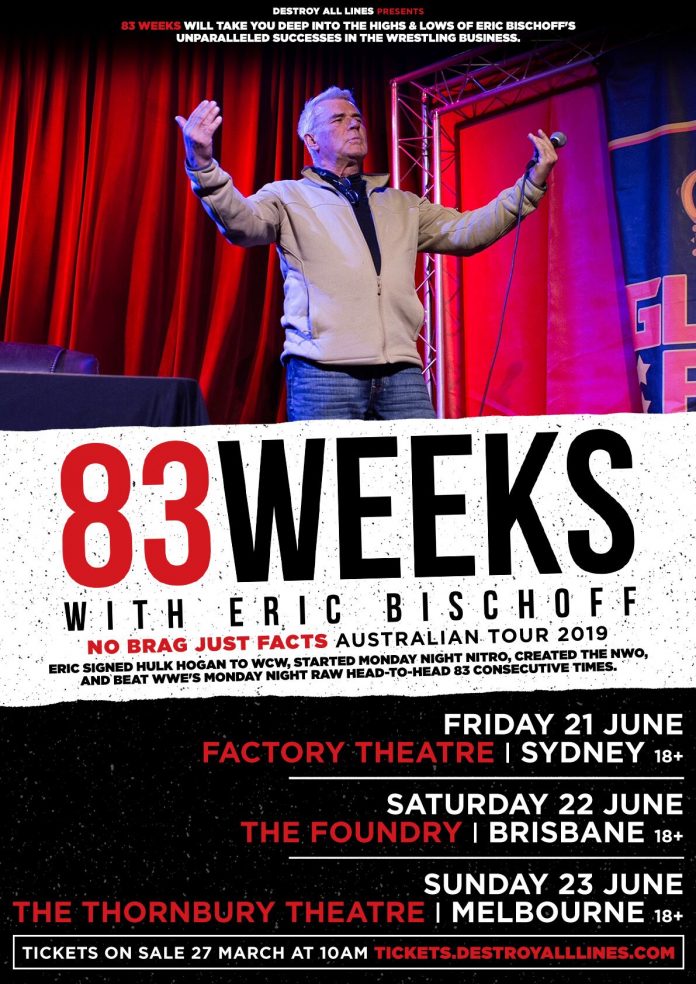 Eric Bischoff is a name synonymous with wrestling.  He is best known as the Executive Producer and later President of WCW and then later becoming the General Manager of WWE’S Raw brand.

Bischoff is a man of many talents, he has been an Actor, Producer, Landscaper, Vet Assistant and even ran a butcher shop. With all these talents I beg the question is there anything he cannot do?

“Well there is plenty I can’t do, I’ve never been a Zookeeper or an X-Ray Technician, otherwise I have every other letter of the alphabet covered”.

Out of the spotlight now and settling back into a normal life away from the World of Professional Wrestling, Bischoff is now enjoying life and experiencing things he hasn’t had time to do.

“You it’s changed as I’ve gotten older, you know up until about 10 or 15 years ago, I love the outdoors, I love to hunt and fish, very active in the outdoors. Now I’m leaning more towards travelling. I still enjoy hunting and fishing and everything outdoors, this is why I live in the middle of Wyoming in the middle of nowhere. You know I do like to travel, when its for vacation and holiday, I am seeing new cultures and learning new thing, I love experiencing new things! I love food, so I love to cook but that’s about it, nothing too exciting”.

“I like planes I had my own plane for a while, I’m a instrument rated pilot, but I kind of got all that stuff out of my system and my tastes tend me a little bit more centred around travel and learning new things”.

Then I still need to know how did you get involved with professional wrestling?

“Well its quite a long story and Ill keep it short! I was a sales manager for a food processor and I had an idea for a children’s game, I created with a friend of mine a business partner – Sonny Ono who I eventually got into WCW. We invented this children’s game and then we had to figure out how to market it and one of the things that I thought would make sense was to advertise our children’s game on a wrestling show.  So I had a meeting with the owner of the show Vern Gagne a promoter in Minneapolis who had a show on ESPN and I made my presentation to him and he was evidently impressed that he hired me to come to work for him in a sales capacity for his wrestling promotion and that’s how I grew into the business, I never really aspired to be in the business, I didn’t work hard getting into the business, it just so happened as  a result of a business meeting”.

One of Eric’s biggest achievements with WCW would of have to have been the face of wrestling Hulk Hogan. Did it take a lot to bring him on board?

“Well it was expensive lets put it that way, it was a challenge, anytime you are dealing with someone and Hulk at that time was the biggest thing in professional wrestling, so it was not only expensive, but it gets complicated in different ways, so that was a little bit of a challenge but really looking but on it now it really wasn’t that difficult”.

Was the Hulkster in anyway demanding?

“No not at all he wasn’t a diva, he didn’t demand green M7M’s in his dressing room but there were certain things he felt had earnt. Percentages of certain revenues like merchandise and pay per views and he knew that if he came on board, those were the first areas that would increase, and he wanted a percentage of that.  They were challenges, they weren’t new they were just difficult to work out”.

With WCW being such a dominance in the ratings up against WWF did you fell that they were threatened or maybe even shut down?

“I knew enough people that worked at WWF at the time when I was competing with them before they became WWE and I had some information from people that worked inside the company at the time they were going through a real financial downturn as a result of what was going on at that time. I didn’t know for sure, I didn’t stay up at nights thinking about it but there were indications at least that there was a possibility”.

Another great signing/storyline would have had to of been the NOW. How did the concept come about?

“Again, another long story, too long for this call. I was looking for a couple of years, prior to watching NWO, I was really looking for a way to create more reality in our storylines and in our storytelling in our characters and I was too sure how to do that, but I wanted to”.

“When Kevin Nash and Scott Hall came along, it occurred to me that was the perfect opportunity to create a storyline that was believable and realistic because the NWO premise was two guys Kevin Nash and Scott Hall who worked at WCW who didn’t make as much money as they felt they deserved who didn’t get the push they deserved so they went to the WWF then they became big stars, then eventually they came back to WCW to take revenge on people that didn’t give them respect and the push that they previously felt they deserved, the premise of the story was really believable because it was true, you didn’t have to make it up, an for most of the audience they knew it was true. So, you achieved 75% of your goal automatically by virtue of the fact that you are telling the story because it is mostly true and then it was a matter of embellishing that story and turning up the volume on it”.

Sadly, WCW folded in 2001 you moved over to WWE as Raw General Manager, what was it like to work with WWE and more importantly Vince Mcmahon?

“You know I enjoyed it all, there wasn’t a moment of it I didn’t enjoy, and I say that in all honesty. I enjoyed working with Vince McMahon I always knew where I stood with him, he was very direct, he was very professional, we got along on a personal level very well so a couple of time of the year we will send each other texts. I have a good relationship with him and I enjoyed a very good relationship when I was there, as I did with everybody in WWE”.

Was there a storyline that you enjoyed the most?

“Several, I think working with Stone Cold Steve Austin was the highlight of my time in WWE, it was such a great story much like the NOW story. I had 20 years of heat with Steve Austin, everybody knew that I fired him via FEDEX and he went on to be a big star, so there was a natural story there waiting to be told and taken advantage of and it turned out great as was working with Steve”.

You are heading to Australia as part of your 83 Weeks podcast, how did the podcast come about?

“Conrad Thompson was having success with Bruce Pritchard and his podcast and Conrad reached out to me. We had been talking and we were friends we had met each other previously and he suggested that a podcast that really focused on the Monday Night Wars with the right format would be a great show. I was hesitant as first the Monday Night Wars was an era that’s been written about there have been DVD’s, there has been a million interviews conducted about it, I didn’t really think that the audience wanted to hear anymore about it but Conrad convinced me with sufficient research and the right format that it would work. I listened to him and thank goodness he was right”.