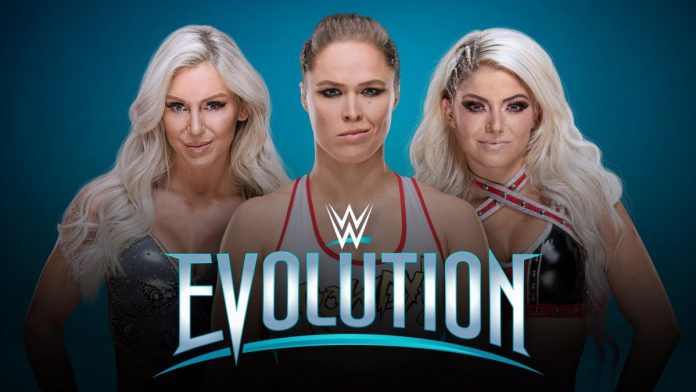 For the first time in WWE history, an all-women’s exclusive pay-per-view event, Evolution, will take place on Sunday, October 28 at 7 pm ET from NYCB LIVE (Australia: Monday, October 29 AEST), home of the Nassau Veterans Memorial Coliseum in New York. The event will stream live on WWE Network and be available on pay-per-view around the world, featuring Women’s Championship matches from Monday Night Raw, SmackDown Live, NXT and NXT UK, as well as the finals of the all-women’s tournament, Mae Young Classic 2018.

“Three years ago, our fans demanded a change with the hashtag, #GiveDivasAChance, and an evolution started,” said Paul “Triple H” Levesque, WWE Executive Vice President, Talent, Live Events & Creative. “Since that time, our female Superstars have overdelivered in every opportunity presented to them, and I expect nothing different during our first-ever all-women’s pay-per-view event.”

The entire women’s roster will be on hand including Ronda Rousey, Charlotte Flair, Alexa Bliss, Sasha Banks, Carmella, Nia Jax and Asuka, as well as Hall of Famers and Legends Trish Stratus, Lita and many more.

“This historic event marks another milestone in WWE’s women’s evolution,” said Stephanie McMahon, WWE Chief Brand Officer. “The spotlight just got brighter for these athletic, talented women, who will once again showcase to the world that they can break down barriers and blaze their own trails.”