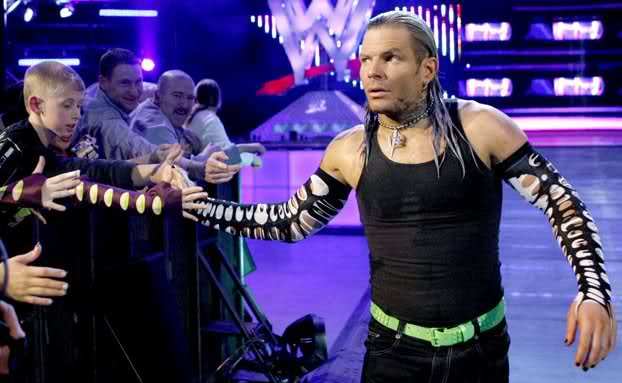 WWE Superstar Jeff Hardy is without a doubt, one of the hard-core performers in the world of professional Wrestling. With his aerodynamic moves and specialty for tables and ladders, he is up there with the best of the best.

It takes a lot to do what these Superstars do every day, what made Jeff become a wrestler?

“Wrestlemania 4, Matt and myself watched Macho man Randy Savage win a Word Title in a tournament and we just kind of fell in love with it, then there was Sting and The Ultimate Warrior with the paint and all that built up and made me who I am today. I was obsessed with wrestling and it made me who I am today”.

Beginning his wrestling career with the WWF (Now WWE) in 1994. Hardy had a slow start working as a jobber (a person who loses matches to make their opponents look stronger). He stayed with the WWF for 3 years before leaving, only to return in 2006.

In this time Hardy collaborated with his brother and fellow WWE Superstar Matt Hardy to form the legendary Hardy Boyz.

Having turned 40 years old and putting his body on the line up to four nights per week, the toll seems to be taken a toll on Hardy’s body.

“I had an idea that I wanted to go through a table vertically off a 14 foot ladder when I was wrestling RVD, I did a dive I jumped he moved I crashed and burned and the table exploded, I thought I wasn’t going to get up from this, my lower spine hurt so bad”.

I am little beat up at the moment; my back is a little better than what is, I’ve been going to a chiropractor every week for a massage and trying to do as much yoga ad stretching. So my back is a lot better, but I’ve been having this issue, a nerve issue, my hand was asleep for like seven week, then finally woken. I hurt it last night I hyper extend it and it hurt bad but the medical team here are working on it”.

Having accomplished so much having been Tag Team Champion multiple times, World Champion and Us Champion, is there anymore Hardy can achieve?

Having wrestled with so many superstars throughout his career Hardy points out one particular Superstar, which stood out the most!

“Undertaker is like the living legend, the legend of WWE, he is the man, the Dead Man, just to be a young up and coming Jeff Hardy in the ring with The Undertaker, having that Underdog vs The Main Eventer match was great storytelling on my part. Almost becoming the champion for the first time in my career. Every time I got in the ring with him it was a learning experience”.

As the 30th WWE Summerslam approaches which first began in 1998 I asked Jeff what his favorite memory was of this event?

“Yes there have been several Summerslam memories but I’m looking forward to creating some this year. Last year before I had my rotator cuff surgery Matt and I were on the free show and there were people coming in but nobody was even there so we didn’t really get to perform. Im looking forward to this August and making another Jeff Hardy memory this year.Summerslam for me is like Wrestlemania, it’s always a favorite for me”

Jeff and his brother Mat will also be heading to Australia for WWE Showdown on October 6th at the Melbourne Cricket Ground which is due to showcase the best of the best WWE Superstars.

“Yes as far I know we are good to go I have always loved Australia, it reminds me of North Carolina, its laid back and cool, the accents there I love it and cant wait to go back”.