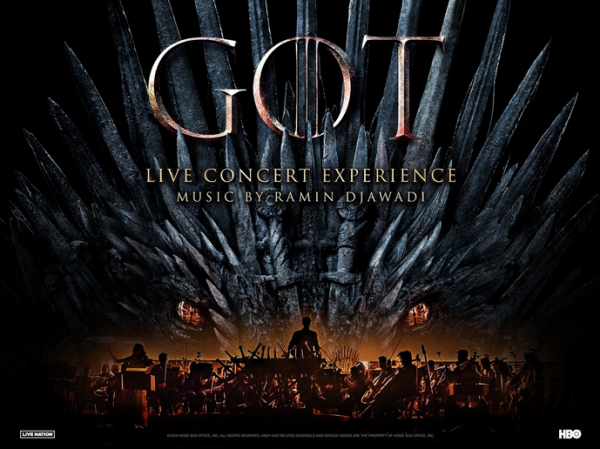 Following sold-out, critically acclaimed performances across North America and Europe, the GAME OF THRONES LIVE CONCERT EXPERIENCE will come to Australia this Summer, bringing the music of Emmy® Award-winning Game of Thrones composer Ramin Djawadito life. As we say goodbye to one of the biggest shows and scores in television history, fans can relive the greatest musical pieces and footage from all eight seasons in an immersive concert experience, brought to life by an international cast of soloists, orchestra and choir, live on stage.

Tickets for the tour – including VIP Experiences – go on sale at 12pm Friday, August 16.

My Live Nation members can be among the first to secure tickets during the pre-sale starting at 9am Tuesday, August 13.

The Game of Thrones Live Concert Experience has amassed close to a hundred shows around the globe and has been praised by audiences and critics alike as a must-see spectacle for fans of the television series. The Guardian described the show as “Westeros brought to dazzling life.” Mashable called it “an epic musical journey,” while the New York Timespraised it as “a symphonic spectacular.” Indiewire said “[Ramin] really outdid himself here with the soaring, searching score that gave the episode its own unique flavour while also selling its most emotional beats. It’s a true symphony at times” while Vulture aptly said, “When Game of Thrones plays sad piano music, it’s time to freak out.”

Having first conceptualized the tour several years ago, Ramin has personally developed the musical and visual elements of the concert to create a live experience that encompasses fan-favourite pieces from the entirety of Game of Thrones. Produced and promoted exclusively by Live Nation in partnership with HBO Licensing & Retail, the concerts use innovative music tour production and video technology to recreate the various realms found throughout Westeros and Essos as well as showcase footage from the series combined with new imagery created exclusively for the immersive show.

The tour includes new musical arrangements from Game of Thrones’ eighth and final season such as the “The Night King” theme, Ramin’s epic 9-minute composition that went viral immediately after debuting on the show. Within days, the track garnered millions of streams across the internet, reached the top 4 most downloaded songs on iTunes and the top 18 most-watched videos on YouTube, and dropped the jaws of audiences and critics alike. The song, along with the rest of Ramin’s exceptional musical work for the season’s third episode “The Long Night”, recently earned him a 2019 Emmy® Award nomination in the category “Outstanding Music Composition For A Series (Original Dramatic Score)”.

Of the live concert experience, Ramin said “When you’re immersed in a combination of video imagery, special effects and live orchestra, soloists and choir, it’s a very engaging experience. That is what we wanted to create with this show – a grand-scale experience that brings the emotion and intensity of Game of Thrones to a live concert setting.“

“To do a tour of this magnitude has been a dream come true and I’m so happy that audiences all over the world can experience it live. Touring it across the U.S. and Europe the past several years has been everything I hoped for and more, and seeing fans’ reactions at each show has been amazing. In the U.S. we created a live concert experience after season six, and updated it after season seven. Now that the final season has aired and we’re able to incorporate the full story into the concert, it feels truly complete. We couldn’t be more excited to share this new version of the show with Australian audiences.”

Ramin has won an Emmy Award® for Game of Thrones® season seven and has been nominated for seven Emmy® Awards (including July’s recent 2019 nomination) and two GRAMMY® Awards. Versatility has defined his career, from celebrated television scores for Game of Thrones, Westworld, Jack Ryan, and Prison Break to feature films such as A Wrinkle in Time, Mountain Between Us, Slender Man, The Great Wall, Pacific Rim, Iron Man and Clash of the Titans. He has even composed scores for blockbuster video games including Medal of Honor and Gears of War 4. Upcoming projects for Ramin include season two of Tom Clancy’s Jack Ryan on Amazon, season three of Westworld, and Gears of War 5 among others.

In addition to premium concert tickets, there are also multiple VIP Experience packages to choose from, with options including a pre-show Medieval Banquet, photo opportunities with the Iron Throne, dedicated butler service of food and beverage to your seat, collector’s item tickets, priority entry into the venue and more.

Be immersed in the thrilling world of Game of Thrones, brought to life as only a live orchestra can.