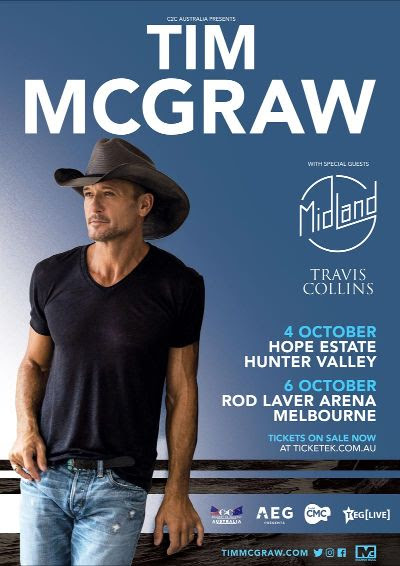 Presale tickets to these two shows will be available via VISA from 10.00am AEST, Thursday 16 May, before tickets go on sale at 11.00am AEST, Friday 17 May 2019 through Ticketek.

Fans attending these shows will witness why Tim McGraw is one of the biggest stars in music, as he brings the full firepower of his North American tour to the Hunter Valley and Melbourne.

“I have always enjoyed playing for Australian audiences, who are some of the loudest and most loyal music fans in the world.  It’s been too long since I’ve been there, and I look forward to seeing you at these special concerts, bringing my full show to fans in the Hunter Valley and Melbourne,” said Tim McGraw.

Tim McGraw has sold more than 50 million records and dominated the charts with 43 worldwide #1 singles. He’s won 3 Grammy Awards, 16 Academy of Country Music Awards, 14 Country Music Association Awards, 11 American Music Awards, 3 People’s Choice Awards and numerous other honours.  His iconic career achievements include being named the BDS Radio’s Most Played Artist of the Decade for all music genres and having the Most Played Song of the Decade for all music genres.

He is the most played country artist since his debut in 1992, with two singles spending over 10 weeks at #1.  His career long tour successes include the record setting Soul2Soul The World Tour 2017 with his wife, Faith Hill.  McGraw starred in and narrated the hit movie, ‘The Shack’, as well as played leading roles in Friday Night Lights and The Blind Side. McGraw recently released two news songs ‘NEON CHURCH’ and ‘Thought About You’, his first new solo music in two years.

Joining these Tim McGraw headline shows, as special guest, will be the popular American country music group, Midland, on their first ever Australian tour.

Midland, Hailing from Dripping Springs, TX lead vocalist Mark Wystrach fronts Midland’s rich sound that is rounded out with lead guitarist Jess Carson and bass player Cameron Duddy.  Their critically acclaimed freshman album, “On the Rocks”, features 13 tracks with song writing credits from each member alongside hitmakers Shane McAnally and Josh Osborne.  Launching to rave reviews from notable outlets such as the Los Angeles Times and Rolling Stone Country, “On the Rocks” was declared “the year’s best Country album” by Washington Post.  The album earned the No. 1 position on Billboard’s Top Country Album Sales chart upon release.  Their debut No. 1 single “Drinkin’ Problem,” which offers an intentional nod to Country music reminiscent of the 1970s and 80s, earned the band their first Grammy Awards nominations for Best Country Song and Best Country Duo/Group Performance.  Midland was also named New Vocal Group of the Year at the 2018 ACM Awards and were nominated for three CMA Awards including Vocal Group of the Year, Single of the Year for “Drinkin’ Problem” and New Artist of the Year.  Midland was also nominated for Group of the Year and Video of the Year (“Burn Out”) at both the 2019 ACM Awards and 2019 CMAs.

Also on the bill is seven-time Golden Guitar winner and back-to-back CMC Male Artist of the Year winner Travis Collins.  His current album and sixth studio album, “Brave & The Broken”, debuted at #1 and has spawned two #1 singles, with the new single, “Road Warriors”, currently climbing the charts.  With a growing string of hit albums, #1 songs, awards and a decade of winning fans all across the country under his belt, Travis Collins continues to cement his footprint as a mainstay on the Australian music landscape.  He is as well-known for his masterful guitar playing and powerhouse vocals as he is for his depth of song-writing and high energy live performances.  Travis Collins is a multiple CMAA and CMC Award winner and in March was presented with the CMA’s ‘Jeff Walker Global Artist’ award.