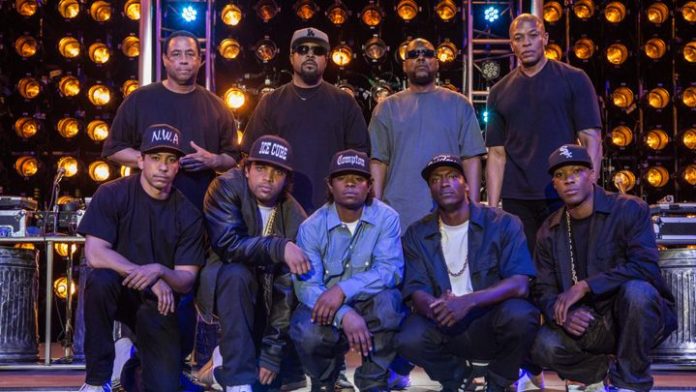 F. Gary Gray, the filmmaker behind new N.W.A biopic Straight Outta Compton, also directed 1995’s Friday, as well as the videos for Dr. Dre and Ice Cube’s “Natural Born Killaz” and Cube’s “It Was a Good Day.” He grew up in South Central L.A., and has been friendly with Dr. Dre and Ice Cube for nearly 20 years. It’s hard to imagine anyone better suited for the Compton job — except maybe Boyz n the Hood director John Singleton, who was also a contender. But even Gray had real concerns about getting the story right. “I knew this was gonna be the most challenging film ever,” says Gray, 46. “And that if I didn’t nail it, it could be a career-ender. At every turn, there were multiple challenges that were daunting, from the start until the end. And I’m glad I did it. It was, no question, the most important movie I’ve ever done. But the execution had to be right in so many ways.”

SIDEBAR
Dr. Dre and ice cube N.W.A Tell All: Inside the Original Gangstas’ Cover Story »
In their interviews for Rolling Stone’s new N.W.A cover story, Gray, the surviving members of the group and the movie’s cast dove deep into the risky process of making Straight Outta Compton. Here’s some of what we learned:

1. The actors re-recorded N.W.A’s entire Straight Outta Compton album (with producer Harvey Mason Jr.) to help them get into character.
“I think Gary strategically had a timeline set up in his mind, in order to help us become a band of brothers,” says Jason Mitchell, who plays Eazy-E. “It was a real boot camp.”

2. Ice Cube always wanted his son, O’Shea Jackson Jr., to play him in the movie, but Jackson nevertheless had to fight hard for the part.
“My pops brought the idea of the movie to me before there was a script,” says Jackson. “My first reaction was to let someone else get the role. Like, I hadn’t done any films. But then something clicked, where it was just, ‘Fuck that.’ I realized it would make me mad to see somebody else play him, so then the part became an obsession.” After a first, weak audition, Jackson spent nearly two years working with an acting coach, before going through multiple tryouts and finally getting the role. Then, in the weeks before the film, he had to drop 20 pounds in order to more closely resemble his dad: “Eating fucking leaves,” Jackson says with a laugh.

3. As a producer, Ice Cube was so determined to supervise the film that he visited the set via Skype while filming another movie, his 2014 comedy Ride Along.
“We were sitting on the set shooting a scene,” says Corey Hawkins, who plays Dr. Dre, “and Dre is there and everything, and I hear Cube’s voice. I turn around — he’s on a computer screen Skyping into the set. He’s like, ‘Turn me around.’ He was making sure that every single detail was good. Anything that they felt they were trying to, for lack of a better word, ‘movie-ize,’ they would nip it down.”

4. The scene where Cube smashes up the office of Priority Records president Bryan Turner almost didn’t make the movie.
“It was in the original script,” says Jackson, “and then once we read a rewrite, it was missing. I had to send out a letter asking for it back because it seemed very important. So when they took the time or the extra money or whatever it took to please me, I knew I had to give it everything I had. So I’m very passionate about that scene in particular. And it made the trailer!”

5. Eazy-E’s widow, Tomica Wright, gave the actor playing Eazy unseen footage of the rapper — including outtakes of music-video shoots ­— to help him capture the late MC’s personality.
“She had tapes that were pretty much ancient, that nobody else had seen,” says Mitchell. “You would see take after take of these guys basically trying to get it right. And you got to see real personalities. If they walked in there with a huge gun, one of them might trip and be like, ‘Oh, shit, fucked it up.’ Yeah, videos that were just gold. And she had some opinions that only your woman would know, stuff you only say when you want to go home and vent. She had some good stuff to give.”

6. Dre gave Cube plenty of direction for “Issues,” his track on Dre’s new Compton album.
“With Dre, it’s more of an exercise in vocalism, really, than just busting a rap. He really wants to put every song together. So it can be longer and more tedious than most artists are used to. You think you’re just going to go in and bust it on the mic like you usually do, but he stopped me pretty much every line, telling me, ‘Say it like this, say it like that.’ But to me it’s important, when you’re working with somebody that’s that good, to let yourself be produced. Rather than saying, ‘I’m Ice Cube; I know what the fuck I’m doing.’ That could be dumb, when you’re working with a master producer. Same as if I was working with Quincy Jones. Ultimately, you want Dre to be happy with the session by the time you leave, for him to do his magic.”

7. MC Ren was satisfied with the studio’s reaction to his furious tweets about a Compton trailer that left him out.
“I got the reaction I wanted, put it that way,” says Ren. “Because that shit wasn’t right. They know that wasn’t right; that’s why they fixed it. Shit, they gotta be right, man; that’s how I see it. I ain’t scared to say what I’ve gotta say.”

8. Dre came up with all the details of the scene that shows the insanity of Death Row Records. Says Gray, “He said, ‘This is what’s going on in Death Row at that time. It was a circus — pitbulls, violence.’ That’s what made him leave the company. It was crazy. Facts are so much more interesting than fiction sometimes.”

9. The movie’s reference to Friday’s most famous line wasn’t planned. “Because the character’s name was Felicia in the movie,” says Gray. “And in the last take, Shea said, ‘Wouldn’t it be funny if I said, ‘Bye, Felicia’? And I said, ‘Hell, yeah!’ So we did that particular shot one more time, and he said it and the crew died laughing, and I said, ‘I’m including that in the movie.’ It wasn’t by design. I wish we were that smart, but it just kind of fell in our lap.”

10. The rapping in the movie is a mix of the original recordings and the actors’ reenactments. “We just went with whatever feels the best,” says Gray. “There are moments where hearing the original members felt better than actors replicating it. And I think we did a pretty good job at just building an experience holistically as opposed to, ‘Here are the rules of film when it comes to biopics, and this person should sing this and this person should do that.’ We threw the rules out the door, you know? And it lends itself to the group.”

11. Gray’s first cut of the movie was an hour longer than the version in the theaters, and he expects to release a director’s cut for home video at some point. “The director’s cut is going to be great,” says Gray, who adds that it may more deeply address issues like the band’s lyrical treatment of women. “Ultimately, the core of the story is about N.W.A and about the rise and subsequent fall of the group. There are so many points of view that to include them all, it would be a five-hour movie. But certainly, there are some things that are not in the movie that could easily be in the movie if we had the time. Cube’s answer to criticism is, ‘Go make your own N.W.A movie and focus on what you want to focus on.’ We focused on what we thought was important.”

12. There are parts of the movie that freaked Ice Cube out.
“It’s shit turning on its ear, and then turning even more,” says Cube. “I wrote a song called ‘Boyz-n-the-Hood’ that ended up being the seed that grew Straight Outta Compton, the record. Through that, somebody discovered me and put me in a movie called Boyz n the Hood. And through doing that movie, I eventually gained enough experience in the movie industry to be able to do this movie called Straight Outta Compton. And my son is in it, and then you see a little version of him in the background of the movie. It just starts to make your mind spin.”

13. Ice Cube wanted the movie to show a lighter side of the group. “What’s cool about the movie is that it showed how much fun we were having,” he says. “We were kids, doing hip-hop and becoming famous. It’s like, ‘Oh, yeah, FBI? Oh, yeah — policemen too, huh?’ We were having fun until the police came and fucked with us. In between that, we were having fun. Coming from those neighborhoods, you don’t have this ‘Woe is me’ attitude. You have this, ‘Shit, I survived yesterday; I should be able to survive today, using my instincts. But where’s the fun at? What are we doing?’ We’re not just going to be sitting and sulking: ‘We’re living in Compton, man. Damn. World is fucked up.'”

14. In its earliest incarnation at another studio, the movie was going to be based on Ruthless, the memoir by N.W.A manager Jerry Heller. “I was like, shit,” says Ice Cube. “If you wanna make the real movie, make it with us. If you wanna make that bullshit, make it with Jerry Heller. And that’s how we got involved. It’s always been a dream of mine, but until somebody said they wanna make it, it seemed like such a humongous undertaking. You have to really be down to take the journey. So when I found out they wanted to make it, I was like, ‘Yo, let’s make it right. Y’all wanna make this shit? Make it right. I mean, anybody can make an N.W.A movie — I can’t stop anybody from making one — but if y’all wanna do it right, you should do it with us.’ So they came to their senses and started developing the movie with us, and then Universal ended up acquiring the movie.”