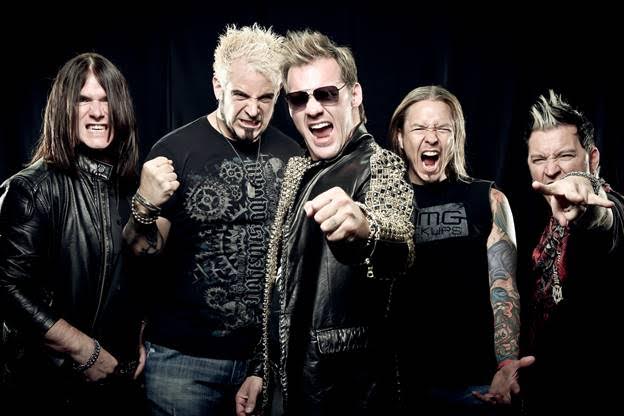 FOZZY have announced that their seventh studio album Judas will arrive on October 13th 2017 via Century Media.

FOZZY  have already experienced incredible success with the “Judas” single. The official music video has accumulated almost 9 million views in just a few months, and the song hit No. 1 on iTunes charts in eight countries. Vocalist Chris Jericho went to bat for the single, eventually convincing Century Media to release “Judas” as the new album’s flagship cut.After their hugest charting (#54 on the Billboard 200) and most successful record, 2014’s “Do You Wanna Start A War” and subsequent tour finished at the end of 2015, the band began focusing on taking their future to a new level creatively and enlisted critically acclaimed song writer Johnny Andrews to produce the new record. With Andrews, Ward and Jericho (the team who created FOZZY‘s highest charting single “Lights Go Out”) at the helm, FOZZY spent 2016 crafting their new masterpiece for a spring 2017 release.

“After the huge success of the Do You Wanna Start A War record and the tour that followed that saw us share the stage with such incredible bands as Kiss, Slash & Myles Kennedy, BuckCherry and Theory Of A Deadman, we decided to take 2016 off to recharge and write songs.  But now WE’RE BACK with our best album EEEVVVEEERRR and are so excited to destroy stages all across the globe again!  There is nothing like playing FOZZY rock n roll to our amazing friends worldwide and watching you guys smile, laugh and have a blast…after all, isn’t that what rock n roll is all about?  We believe that there’s only three things you can count on in life: death, taxes and the fact that if you come to a FOZZY show, you are GOING to have a great time!!  That’s the FOZZY money back guarantee…”- Chris Jericho. 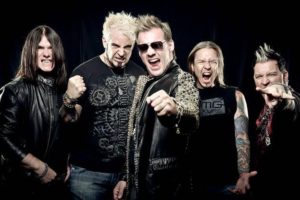 Chris Jericho talks about JUDAS the album exclusively for Australia:

The success of the single Judas is mindblowing!

‘’I think it’s the right song at the right place at the right time. I think there’s been a lot of goodwill towards Fozzy over the years with a slow and steady build. And I think that I had such a huge year last year in 2016 in the WWE that a lot of people wanted to check out why I left the WWE to go to Fozzy and they gave us a chance when they hadn’t in the past. And as a result, heard this song Judas, which is our best song. So, hooky, so heavy, so dark the lyrics are very dark. Everyone can relate to those lyrics. I think like I said it’s just a great piece of timing and that so many people check out the band that never had in the past. And then hearing this amazing song with these lyrics that everybody can relate to ‘’Everyone I’ve Ever Loved I’ve Pushed Them All Away’’

It’s about making the wrong decision knowing that you’re making the wrong decision listening to the Judas in your mind and betraying yourself. So, I think all those things combined with a killer video, a great team, the return of Paul DiLeo. All of these things really, just all kind of compounded at the right time to create this perfect storm of Judas which is now a top 20 billboard which is awesome.’’

What can we expect from Judas the album.

Well I mean if you like Judas the song, there was actually a big debate with the record company as to what the first single should be. There’s so many great songs on this I think if this was like 1987 in the days of Hysteria and Appetite for Destruction when you saw a band that had five or six singles. This is that type of record. There was a lot of argument about whether Painless should be the single or Elevator or Weight Of My World and now Drinkin’ With Jesus is in contention so there’s a lot of great songs on the record. It’s very much a more compact album. It’s very much more about the songs and very much, is this song a single if it’s not if it doesn’t have a single potential let’s not even put it on the record so we have 11 singles on this record which is the way we wanted. It took a long time to get it right. We didn’t even record a couple of songs that we wrote for it, they just weren’t right. So these are the best 11 songs that we that we have, all of them could be hits. And as we’ve seen with Judas I think this record is going to take us to a completely different level, all across the board.

The writing process is a lot different this time around

Before it was always Rich who wrote the music and I wrote the lyrics. We worked with Johnny Andrews last record for lights go out which was our biggest song to date and we decided we wanted to use an outside producer for this record. You know like Kisswith Bob Ezrin or Metallica with Bob Rock. Not that we’re those bands but it’s the same vibe that you want to do something different and there wasn’t anybody named Bob available apparently. So we went with Johnny Andrews because we had really enjoyed working with him on Lights Go Out and he produced the record and he co-wrote all the songs with Rich. I submitted all my lyrics and three of them were used which are Running With The Bulls, Wordsworth Way and Three Days In Jail but the rest are all Johnny and Rich collaborations. So they write them and I sell them. It really doesn’t matter. It’s just whatever’s best for the song. And we had a great songwriting team in Rich and Johnny and the contributions that I made, the lyrics that I contributed. And once again every song, not worried about if there’s a solo on it, Judas doesn’t even have a soul it’s just got a really cool middle Queen section. A lot of it would always be like well let’s write a song with a crazy solo in it in a 4-minute intro and all that’s gone. It’s very compact is very much what AC/DC did when they worked with Mutt Lang also a Robert. Lot of Robert’s man. We need to find Robert but we found Johnny and it’s even better for us.

When can Australian fans expect a tour.

We’ve been waiting to come back to Australia since 2013. We were lucky enough to tour there twice in 2013 on the Soundwave tour with Metallica and then with Steel Panther, great times. Australia is one of our favorite places to go. We’ve been there I think four or five times now with Fozzy but we haven’t been there since the Do You Want To Start A War Record came out which is 2014. I remember we listened to the demos for Do You Want To Start A War Record in our hotel room on that tour with Steel Pantherso we got to make it back there. That’s one of our goals and I know there’s a lot of people waiting to see us and we are super excited about Australia. One of our favorite countries to tour in, Foztralia, Fozzy in Aussie has to happen again. So we’re looking forward to doing that on this tour cycle. Hopefully in 2018 for sure.