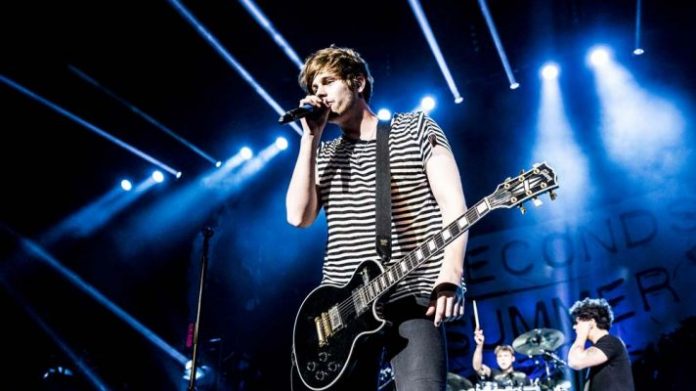 Margaret court arena is jam packed to see the boys from Sydney commonly known as 5SOS. Anticipation building, the crowd becoming restless start chanting ” 5SOS” eager for the show to begin.
5 Seconds of summer burst onto Margaret Court Arena stage to the deafening sounds of screaming fans (mainly teenage girls) that have travelled near and far to see the boys light up the stage.
Luke, Michael, Calum and Ashton, bringing the house down with all familiar tunes headlining with Carry On. Having last played in Melbourne in 2015 the boys haven’t lost their touch giving the screaming crowd want they came to see…
Having met at school in the Sydney suburb of Windsor and funding their own EP, the boys quickly amassed 50.000 Facebook fans and over 100,000 Twitter fans cementing themselves as Australia’s new supergroup.
Playing all the hits that fans have come accustomed to – Amnesia, Good Girls, Jet Black Heart. Completing the set with “That’s what I like about You” the Romantics cover, they boys walked off stage. The 1000’s of screams bringing the boys back on for an encore playing “she’s kinda hot” and “She looks so perfect”
5SOS can do no wrong last securing the opening act for One Direction’s North America leg of “Where We Are Tour”.