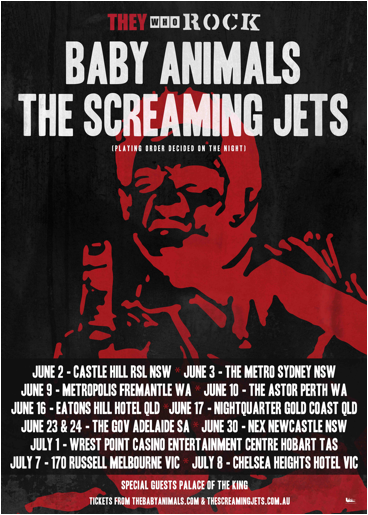 Screaming Jets- The iconic Australian band who first formed in Newcastle in 1989 and fronted by the energetic Dave Gleeson are about to embark on a national tour alongside The Baby Animals.

The group’s first performance as The Screaming Jets was as The Love Bomb in a Newcastle pub in March 1989. There they won the inaugural National Band Competition run by youth radio broadcaster Triple J. The group then relocated to Sydney in early 1990 to support The Angels on a national tour. In May 1990, they signed with independent label, rooArt. Their debut extended play (EP), The Scorching Adventures of the Screaming Jets, was issued in December 1990.

In 1991 the Screaming Jets released ‘Better’ which peaked at #4 on the Aria Charts, the group releasing 7 studio albums in total, the latest offering being Chrome.

Surviving in the music industry for over 25 years, the Jets have never sounded better and are looking forward to performing for their legion of fans when the tour begins in June.

Live and Loud was fortunate enough to speaking to Jets guitarist Jim Hocking.

Jim himself is a veteran in the music industry fronting both Jimi The Human as well as Spectre7.

Jin we are here to talk about the upcominng tour with the Baby Animals, how are the tour preparations coming along?

“Thinking about the tour, the Jets have been on the road for the last couple of years consistently, a summer tour and a mid year tour for our ‘Chrome’ album especially. Normally what we do is discuss if we are going to do some new songs, or what we might do with the set list. Really being adults and having regular lives, Dave sings in The Angels as well, and I have a blues band which I play in so we really kind of think about it we do it on the fly to be honest. We do a bit of rehearsal and regroup and out we go”.

And this would be the first time in 25 year’s that the bands are touring together?

“The Jets and Baby Animals did a gig together at Hope Estate and it was good to see the gang again. I knew the Baby Animals before I started with the Jets. I knew Suzi when she moved over from Perth. We all just liked each other and thought it would be a great thing to do to commemorate the tour that the band did together 20 years ago. Their was a bit of nostalgia involved and a general idea that people would like to see a line-up like that”.

You joined the band to replace original band member Richard Lara, what did you know about the Screaming Jets at that time?

“I thought they were a filthy rock and roll band, I didn’t know if that was going to work for me. I was touted as this Vegetarian rocker from Melbourne. Originally Richie was leaving the band for a while, as he wasn’t well. The band had done a US tour, the tour went a little bit pear shaped and one of the things that happed was Richie had gotten sick and he needed to take a little time out. I was into a 3-week tour filling in for him, so that didn’t look like a too hard thing to do. I knew the guys, we had all met, I had a band called Jimi The Human and Spectre 7 and in fact The Screaming jets opened up for me, so that’s when we all met. I thought a 3-week tour would be alright, I was living in Sydney at the time. It kind of defaults that I joined the band as Rich just never came back”.

In 2010 you rejoined the band, was that an easy choice and was it well accepted by the band?

“We all had ups and downs to be had with any group of guys/people working together for a common cause, Dave and I have remained pretty close even when I wasn’t in the band, I still stayed in the pockets and knew what was happening with everyone as Dave and I spoke regularly. While I was doing a blues thing I worked on Dave’s solo album when I had a studio down here on the coast in Victoria, I was never far away. People thought that if ever the chance for myself to re-join the band, because Dave and I are such close friends that I would say “Yeah I’ll do it”. That’s how it came about. The Summernats came along in Canberra, Dave asked me if I would do a gig if we needed? I said, “Yeah when is it” he replied “Friday” this was on Wednesday when he called me. That was me coming back to the band”.

The Screaming Jets are such an iconic Australian band as well as Rose Tattoo, The Angels and ACDC, who do you think are the upcoming Australians acts, which will carry on that flame?

“Well you know what we have been fortunate to have these really good band’s open up for us over these last couple of years, we had a band ‘Tracer’ from Adelaide who are now headlining their own shows in Europe, Tequila Mockingbird, Stone field, I think there are lots of good bands coming up through the scene. I sometimes don’t believe that the radio and media support them in the way that it use to when we were coming up in the rock world. It seems to be a focus on reality TV and the way these young rock bands ar not given the time that they deserve. It’s a shame that some have to go abroad to really make their mark”.

Being in the industry so long, what is the biggest change you have seen?

“I’ve just touched on this stuff with the TV singing phenomenon, that’s a new element in a sense. I was living in Sydney with the Jets back in the day, and I think there has been a refocus in the live music scene a little bit because we never had Casino’s when I started. You had pubs that would house little rock bands/folk duos that were doing that. A lot of the venues shut down to accommodate the existence of the Casino in Victoria. The flipside is we now have this accessibility to the world if you want via the internet and of course I now discover musician’s in Atlanta Georgia just by them sending me links or via YouTube so on one sense I’m saying our local scene has reduced a little bit, we also have this worldwide access, this economy where you can see musicians get discovered and get worldwide attention based on a YouTube clip, how that looks financially that’s another question”.

Dave Gleeson is so energetic on stage, how do you keep up with him?

“I can let him, in my other career with my other band; I am the front man, the leader so in The Screaming Jets I let Dave go. He’s the front man of the band; he keeps me on my toes. I remember when I first joined the band, he would fall on the ground and roll around as if he hurt himself, and it took me ages to realise that was part of his shtick, all these people would be looking at him with a face of concern, I know he does this but that looks real. He’s a delight to work with; he’s a wonderful larrikin character and sometime he can be off colour but I think that he would be amusing to fellow drinkers at a bar and no one would care what he would say”.

What can the fan’s expect when they see the Jet’s live.

“The thing about the Screaming Jets and where we are now is I think we are in a better place, than where we have been in a long time, we are a family! The Screaming Jets, make no mistake we are like a bunch of people who are married to each other, we still love getting out there. We love rocking out we love what we are doing. There a lot of good hypes coming through from The Screaming Jets, we do quite a few songs off the new albums as well as some old ones so we try to make sure we have a well rounded show. We pride ourselves on being a proper band. It’s a good Rock and Roll Show.

With special guests Palace Of The King