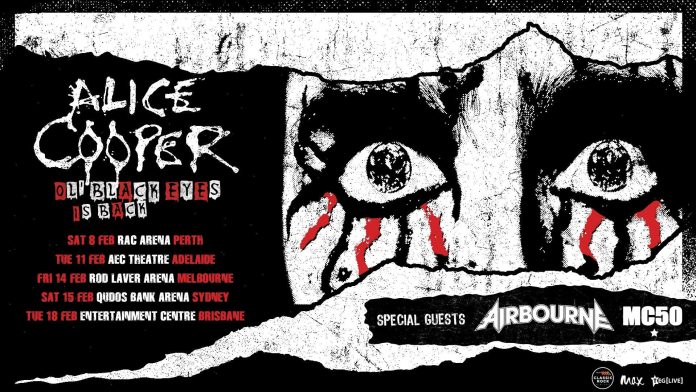 Iconic shock rocker and Rock ‘n’ Roll Hall of Famer Alice Cooper has announced he’s returning to Australia in February 2020 with his all-new “Ol’ Black Eyes Is Back” show.  Special guests with Alice Cooper on the Australian leg of this international tour will be Aussie rock stalwarts Airbourne along with MC50, featuring Wayne Kramer of the legendary MC5 with an all-star band performing MC5 classics.

Having shocked and delighted fans in equal measure for five decades, Alice Cooper’s new outlandish stage show incorporates a setting inside his Nightmare Castle, and features not only the return of FrankenAlice, but also the new Billion Dollar Baby. With a revamped setlist which includes not only the classic hits but some select deep album tracks and new music, Australian fans are in for a real treat when Alice Cooper takes to the stage in early 2020.

The tour, presented by TEG Live, will kick off at Perth’s RAC Arena on February 8, moving through Adelaide, Melbourne, Sydney and finishing at the Brisbane Entertainment Centre on February 18.

Pre-sale tickets for “Ol’ Black Eyes Is Black” Australian tour will be available via Telstra Plus from 11am (local) Thursday 15 August, before the general public on sale at 2.00pm (local) Wednesday 21 August 2019 from Ticketek.

Alice Cooper and his “Ol’ Black Eyes Is Back” show is currently wowing crowds in North America until 16 August, followed by a 6-week UK European tour (31 August –  12October), before returning to the United States for further dates (3 November – 30 November).

Known as one of the hardest working people in music, Alice Cooper also records and tours with The Hollywood Vampires with pals Joe Perry and Johnny Depp, while continuing his long-running nightly syndicated radio show “Nights With Alice Cooper,” heard worldwide on over 100 radio stations, including Australia.

New music from Alice Cooper is also imminent, with the announcement of the September 13 release of mini-album “The Breadcrumbs” from (earMUSIC), a tribute to his Detroit rock origins, recorded in Detroit with Detroit musicians, featuring covers of classic Detroit-originated songs.

Special guests to Alice Cooper are Australian Rock ‘n’ Rollers, Airbourne. The loud and proud musicians have played around the globe and performed on the main stage at Download UK and co-headlined the Wacken Festival.

“OL’ BLACK EYES IS BACK“