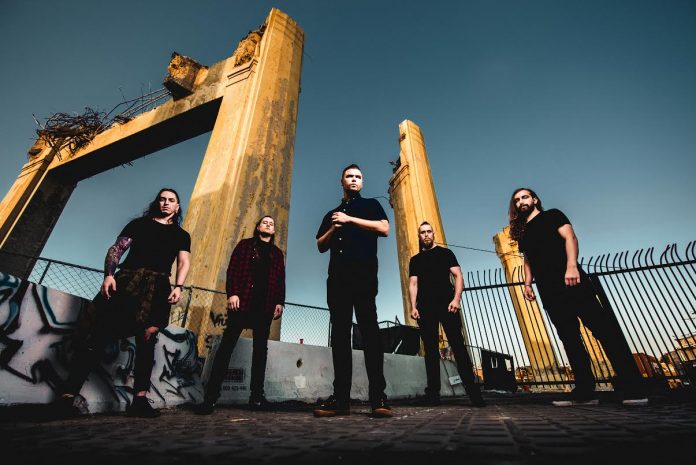 N: Thanks for taking the time to chat to us today Alex, we’ll jump right into it! Fallujah in my opinion are a very unique metal band, which is not easy to do in this day and age. You’ve got your own sound, that real heavy, dark, driving metal mixed with pure, just…beautiful music in a great combination that works so well and feels so good. Do you think it’s fair to say that you guys have developed your own sound over time that you just don’t hear anywhere else and if so, how did it come about?

A: I think people when they ask this question want a grandiose, interesting story. They all wanna hear “Oh well we went to the mountains of Kathmandu and got lost together then it all just made sense!” or something. There’s no real tale, Fallujah is a bunch of dudes from highschool who started a garage band and wrote the kinds of songs we wanted to hear, then those songs just came about. There was a bit of dissatisfaction with what we’d see in other bands and a certain kind of sound that we wanted to hear that we weren’t hearing so we tried to “be our own favourite band”.

N: Sure and in all honesty there’s nothing wrong with that at all, it shows you guys are creating something that flows naturally through you so respect there.

A: I think the kids want a secret potion of sorts “Oh if you just do THIS differently your band will be unique and successful too” and it’s like, no, just try your hardest not to suck and hopefully you’ll do something interesting.

N: Just do what you love! Now, the new, absolute scorcher of an album Dreamless dropped back in April this year and marks the 3rd full length album by Fallujah. This album in particular to me really personifies that Fallujah sound you guys have created over the years, but it also feels a bit different, a bit…hmm deeper and more epic both lyrically and musically. What would you say is the defining thing Fallujah had done differently in recording Dreamless compared to your other albums and the EPs?

A: We really wanted to make the record bigger sounding, heavier, more melodic at the same time. All these things we went in there wanting to do consciously. How do we take all of the things we did in our last songs and make them more intense? Not intensity of music but how do we make the atmospheric parts more atmospheric, how do we make the emotional sections more emotional? So we just went for it and strove not to lose sight of who we are in the process. It’s very easy to go on tangents when writing a record and those kinds of things can undermine and cloud our vision. We wanted to do all of those things and it worked out.

N: Definitely did. Slight divergence here, I ended up coming up with something here over the past few months of listening to your music. I’ve heard a lot of different genres thrown at Fallujah: progressive metal, death metal, tech metal…and to me they didn’t really capture the true essence of Fallujah so I came up with my own. When I listen to your music I hear raw brutality and pure beauty in music, as such I call you guys brutiful metal. What do you think? That’ll catch on right? *laughs*

A: I mean I won’t say no! *laughs* you can call it whatever you like! I’m not sure there’s going to be a”brutiful section” in the local record store. I mean it’s heavy music and it’s meant to be really pretty at the same time. I won’t say no! I’ll take that.

N: Speaking of beautiful, and getting back on track: what was it like having Tori Letzler and Katie Thompson as guest vocalists this time around?

A: It was great, both of them are super talented and competent singers, I’ve become very close with Tori and she’s one of my good friends now. So much so in fact that my mum invited her and her boyfriend over for Christmas this year! We toured for a few weeks back in October. Katie we met in Indianapolis two tours ago and they’re both definitely some of the most talented people we’ve had surrounding the band I would hit either of them up again in a heartbeat.

N: You mention touring there, just on that you gentlemen are fresh off the back of the Never Say Die tour which went right through November I believe, playing with some great Aussie metal bands as well. Tell us about the tour and some of your personal highlights.

A: It was great, we’ve toured with Thy Art is Murder twice previously, we met the Make Them Suffer guys, I actually have worked them previously doing their MySpace layouts as I’m a graphic designer also! Partied with the bands all the time. We were on the same bus as the Make Them Suffer guys so with all that there was a lot of ice already broken between the bands which made it really fun. As for highlights, we had plenty. Some of those were some of the biggest non-festival shows we’ve ever played. Leipzig and Cologne were just massive. A lot of good partying moments…I watched one of the guys on the tour who will not be named who had the s**t beaten out of him by two strippers in Prague in front of like 12 other dudes, that was one of the funniest tour moments I’ve ever had! That and us partying too hard on the second day of the tour to the point where the tour manager had a meeting with us to tell us to calm down! Just a lot of rowdy fun on the tour. Not everyone necessarily loves to party on those bus tours but I certainly made the most of it.

N: Cool, well when you’re down here in March we in Australia and Melbourne in particular have a pretty big party scene so wherever you head out we’ll make sure you enjoy yourselves.

A: I certainly hope so too, I’m ready to be shown around.

N: Sounds good. So, what’s been your personal favourite song to perform live lately and why?

A: That’s a hard question, I enjoy playing them all. The crowd has really responded to Amber Gaze which makes me like it in particular. It’s become a bit of a fan favourite, there are a few crowd participation moments too. The Void Alone I really enjoy playing live mainly because towards the end we turn all the lights off in the house and get everyone to hold up their lighters or phones and I record it off my phone and going through them is awesome. They’re all up on our social media too. Sometimes when there’s a bit of a language barrier it’s hard, there were a couple shows in Europe where we’d be asking the crowd to do something and they wouldn’t get it and that’s OK! When we were in Leipzig, there were 1500 or so people in this giant German dance hall and having those lights as far as the eye could see was really cool.

N: When you’re down in Australia I think you’ll find we’re a good crowd to play to. For one, we can speak English! But also we love that sort of live interaction. Fallujah are supporting the massive Killswitch Engage on their upcoming tour and you’ll be here with that, will that be your first time coming to Australia?

A: With the band, yes, I myself came down once before in roughly 2010. My sister did a semester abroad in Brisbane. We made a bit of a trip of coming to pick her up and I got to see the Gold Coast, Brisbane and Sydney. I never saw Melbourne which I’ve always wanted to see so luckily on this next tour we have a day off in between the two shows and I can explore it.

N: I can tell you that we like to go pretty hard here in Melbourne!

A: I’ll hold you to that!N: Hopefully your first experience performing in Melbourne will highlight that to you. How does it feel supporting Killswitch Engage? Are they a bit of an influence on Fallujah?

A: They were certainly one of my favourite bands growing up. I remember buying End of Heartache and Alive or Just Breathing. I still have them in my CD case. For a lot of people they were really important for underground metal. They’re not so underground any more with Grammy nominations and stuff but you really can’t ask for a better or more exciting opportunity to open for a band.

N: What can we expect from the upcoming liveshows in March?

A: Hopefully you can expect them not to suck!N: I’m sure they won’t!A: As far as material goes it’s hard to say, we haven’t finalised the set list just yet but you’ll definitely get a great show. We’ve had a lot of fans in Australia for a long time and we’ll make sure to at least meet your expectations.

N: It’ll be my first time seeing you guys myself so I cannot wait to check you out then. Alex thanks again for taking the time out to chat to us, we’ll be putting details on the site for how people can get tickets to check you and Killswitch Engage out when you’re in Australia in March 2017, though with big names like these they may already be sold out!

A: No problem we’ll see you then.

Fallujah will be in town supporting Killswitch Engage on their Ausralian tour..